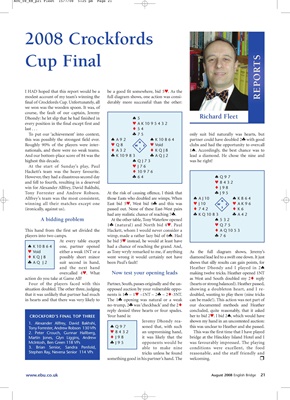 I HAD hoped that this report would be a be a good fit somewhere, bid 5♥. As the

modest account of my team’s winning the full diagram shows, one action was consi-

final of Crockfords Cup. Unfortunately, all derably more successful than the other:

we won was the wooden spoon. It was, of

course, the fault of our captain, Jeremy

Dhondy: he let slip that he had finished in ♠

every position in the final except first and ♥

To put our ‘achievement’ into context, ♣

75 only suit bid naturally was hearts, but

nationals, and there were no weak teams. ♦A32 ♦KQJ8 1♠. Accordingly, the best chance was to

highest this decade. ♠QJ73 was he right!

At the start of Sunday’s play, Paul ♥J76

and fell to fourth, resulting in a deserved ♥ 8432

Tony Forrester and Andrew Robson. At the risk of causing offence, I think that ♣ J95

Allfrey’s team was the most consistent, those Easts who doubled are wimps. When ♠ A J 10

A bidding problem At the other table, Tony Waterlow opened ♠532

This hand from the first set divided the Hackett, whom I would never consider a ♦ A Q 10 5 3

At every table except he bid 5♥ instead, he would at least have

♥ Void either a weak 1NT or a as Tony wryly remarked to me, if anything As the full diagram shows, Jeremy’s

♦KQJ8 possibly short minor went wrong it would certainly not have diamond lead led to a swift one down. It just

and the next hand Heather Dhondy and I played in 2 ♠

action do you take at Game All? as West and South doubled my 2♦ reply

Four of the players faced with this Partner, South, passes originally and the un- (hearts or strong balanced). Heather passed,

situation doubled. The other three, judging opposed auction by your vulnerable oppo- showing a doubleton heart, and I re-

in hearts and that there was very likely to The 1♣ opening was natural or a weak can be made!). This action was not part of

no-trump, 2♣ was ‘checkback’ and the 2♦ our documented methods and Heather

reply denied three hearts or four spades. concluded, quite reasonably, that it asked

CROCKFORD’S FINAL TOP THREE Your hand is: her to bid 2♥. I bid 2♠, which would have

Jeremy Dhondy rea- shown my hand in an uncontested auction:

Tony Forrester, Andrew Robson 130 VPs ♠Q97 soned that, with such this was unclear to Heather and she passed.

2. Peter Crouch, Gunnar Hallberg, ♥8432 an unpromising hand, This was the first time that I have played

Martin Jones, Glyn Liggins, Andrew ♦J98 it was likely that the bridge at the Hinckley Island Hotel and I

McIntosh, Ben Green 118 VPs ♣J95 opponents would be was favourably impressed. The playing

Stephen Ray, Nevena Senior 114 VPs tricks unless he found reasonable, and the staff friendly and

something good in his partner’s hand. The welcoming.