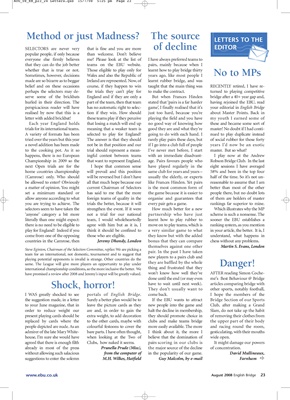 Method or just Madness? The source LETTERS TO THE

popular people, if only because than welcome. Don’t believe

everyone else firmly believes me? Please look at the list of I have always preferred teams to

that they can do the job better teams on the EBU website. pairs, mainly because when I

whether that is true or not. Those eligible to play only for learnt how to play bridge thirty

Sometimes, however, decisions Wales and also the Republic of years ago, like most people I No to MPs

made are so bizarre as to beggar Ireland are represented. Now, of learnt rubber bridge, and was

belief and on these occasions course, if they happen to win taught that the main thing was RECENTLY retired, I have re-

perhaps the selectors may de- the trials they can’t play for to make the contract. turned to playing competitive

serve some of the brickbats England and if they are only a But when Frances Hinden bridge after a 40+ year gap and,

hurled in their direction. The part of the team, then that team stated that ‘pairs is a far harder having rejoined the EBU, read

perspicacious reader will have has no automatic right to selec- game’, I finally realised that it’s your editorial in English Bridge

realised by now that this is a tion if they win. How should just too hard, because you’re about Master Points. Back in

letter with added brickbat! these teams play if they perceive playing the field and you have my youth I earned some of

trials for its international teams. meaning that a weaker team is good they are and what they’re master! No doubt if I had conti-

A variety of formats has been selected to play for England? going to do with each hand. I nued to play duplicate instead

tried over the years but this year The answer is that they should rarely play pairs these days, but of social rubber for those forty

to the cooking pot. As it so trial should represent a mean- I’ve never met before, I start master. But so what?

happens, there is no European ingful contest between teams with an immediate disadvant- I play now at the Andrew

Championship in 2009 so the that want to represent England. age. Pairs favours people who Robson Bridge Club. In the last

(Camrose) only. Who should will be reversed but I don’t have usually the elderly, or experts half of the time. So it’s not un-

be allowed to enter? Obviously all that much hope because our like Frances Hinden. Yet pairs reasonable to assume that I am

a matter of opinion. You might current Chairman of Selectors is the most common form of better than most of the other

set a minimum standard or has said to me that the more the game because it is easier to people there, but no doubt lots

you are trying to achieve. The trials the better, because it will every pair gets a game. rankings far superior to mine.

selectors seem to have taken the strengthen the event. If it were How much better for a new Which illustrates why the MP

‘anyone’ category a bit more not a trial for our national partnership who have just scheme is such a nonsense. The

literally than one might expect: team, I would wholeheartedly learnt how to play rubber to sooner the EBU establishes a

there is no need to be eligible to agree with him but as it is, I move on to play teams, which is ranking system, as you mention

play for England! Indeed if you think it should be confined to a very similar game to what in your article, the better. It is, I

come from one of the opposing those who are eligible. they know but with the added understand, what happens in

countries in the Camrose, then Jeremy Dhondy, London bonus that they can compare chess without any problems.

themselves against one other Martin S. Evans, London

Steve Eginton, Chairman of the Selection Committee, replies: We are picking a

pair. In the past I have taken

team for an international, not domestic, tournament and to suggest that

playing potential opponents is invalid is strange. Other countries do the new players to a pairs club and

same. The League will give more players an opportunity to play under

international championship conditions, so the more inclusive the better. We

they are baffled by the whole

thing and frustrated that they

have promised a review after 2008 and Jeremy’s input will be greatly valued. won’t know how well they’ve AFTER reading Simon Coche-

Shock, horror! have to wait until next week).

They don’t usually want to

I WAS greatly shocked to see portals of English Bridge. come back. I hope the members of the

the suggestion made, in a letter Surely a better plan would be to If the EBU wants to attract Bridge Section of our Sports

to your June magazine, that in leave the picture cards as they new people into the game and Club, after making a Grand

order to reduce weight our are and, in order to gain the halt the decline in membership, Slam, do not take up the habit

present playing cards should be extra weight, to add decoration they should promote choice in of removing their clothes from

replaced by cards where the to the other cards, maybe with clubs and make teams bridge the upper part of their body

people depicted are nude. As an colourful festoons to cover the more easily available. The more and racing round the room,

admirer of the late Mary White- bare parts. I have often thought, I think about it, the more I gesticulating, with their mouths

house, I’m sure she would have when looking at the Two of believe that the domination of wide open.

agreed that there is enough filth Clubs, how naked it seems. pairs scoring in our clubs is It might damage our powers

already in most of the press Prunella Prude (Miss), the major source of the decline of concentration.

without allowing such salacious from the computer of in the popularity of our game. David Mullineaux,