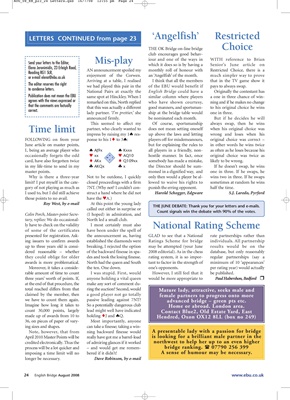 Send your letters to the Editor, Mis-play iour and one of the ways in

which it does so is by having a

WITH reference to Brian

AN announcement spoiled my monthly roll of honour with Restricted Choice, there is a

or e-mail elena@ebu.co.uk enjoyment of the Corwen. an ‘Angelfish’ of the month. much simpler way to prove

Arriving at a table, I realised I think that all the members that in the TV game show it

The editor reserves the right we had played this pair in the of the EBU would benefit if pays to always swap.

Publication does not mean the EBU same spot at Hinckley. When I similar column where players a one in three chance of win-

agrees with the views expressed or remarked on this, North replied who have shown courtesy, ning and if he makes no change

that the comments are factually that this was actually a different good manners, and sportsman- to his original choice he wins

lady partner. ‘I’m prettier,’ she ship at the bridge table would one in three.

announced firmly. be nominated each month. But if he decides he will

This seemed to affect my Of course, sportsmanship always swap, then he wins

impress by raising my 1♠ res-

does not mean setting oneself

up above the laws and letting

when his original choice was

wrong and loses when his

FOLLOWING on from your ponse to his 1♦ to 3♠: players off for misdemeanours, original choice was correct –

June article on master points, but for explaining the rules to in other words he wins twice

I, being an average player who ♠ AJ9x ♠ Kxxx all players in a friendly, non- as often as he loses because his

♥ AQ10 hostile manner. In fact, once original choice was twice as

♦ Q109xx somebody has made a mistake, likely to be wrong.

in my life-time to send in my ♣ AKQx ♣ x the Director should be sum- If he doesn’t swap, he wins

master points. moned in a dignified way, and one in three. If he swaps, he

Why is there a three-year Not to be outdone, I quickly only then would a player be al- wins two in three. If he swaps

limit? I put myself in the cate- closed proceedings with a firm lowed to waive his rights to sometimes at random he wins

gory of not playing as much as 7NT. (Why not? I couldn’t con- punish the erring opponent. half the time.

I used to, but I did still achieve struct a hand where he did not Harold Schogger, Edgware S.J. Laredo, Pyrford

those points to no avail. have the ♥A.)

Roy West, by e-mail At this point the young lady

THE JUNE DEBATE: Thank you for your letters and e-mails.

called out either in surprise or

Count signals win the debate with 90% of the votes.

Colin Porch, Master-point Secre- (I hoped) in admiration, and

tary, replies: We do occasional- North led a small club.

ly have to check on the validity

of some of the certificates

I most certainly must also

have been under the spell of

presented for registration. Ask- the announcement as, having GLAD to see that a National rate partnerships rather than

ing issuers to confirm awards established the diamonds were Ratings Scheme for bridge individuals. All partnership

up to three years old is consi- breaking, I rejected the option may be attempted (your June results would be on the

dered reasonable – whether of the backward finesse in spa- 2008 editorial). As in the chess database, but only reasonably

they could oblige for older des and took the losing finesse. rating system, it is so impor- regular partnerships (say a

awards is more problematical. North had the queen and South tant to factor in the strength of minimum of 10 ‘appearances’

Moreover, it takes a conside- the ten. One down. one’s opponents. per rating year) would actually

rable amount of time to count I was stupid. First, would However, I still feel that it be published.

three years’ worth of points. If, anyone holding a vital queen would be more appropriate to Paul Habershon, Bedford

at the end of that procedure, the make any sort of comment du-

total reached differs from that ring the auction? Second, would Mature lady, attractive, seeks male and

claimed by the member, then a good player not go totally female partners to progress onto more

we have to count them again. passive leading against 7NT? advanced bridge – green pts etc.

Imagine how long it takes to So a potentially dangerous club Home or abroad. London area.

36, on pieces of paper of vary- Most importantly, anyone

ing sizes and shapes. can take a finesse; taking a win-

Note, however, that from ning backward finesse would A presentable lady with a passion for bridge

credited electronically. Thus the of admiring glances if it worked northwest to help her up to an even higher

imposing a time limit will no bered if it didn’t! A sense of humour may be necessary.