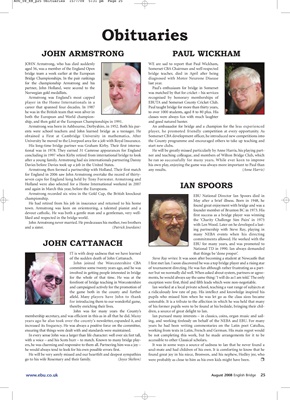 JOHN Armstrong, who has died suddenly WE are sad to report that Paul Wickham,

aged 56, was a member of the England Open Somerset CBA Chairman and well respected

bridge team a week earlier at the European bridge teacher, died in April after being

for the championship Armstrong and his last year.

partner, John Holland, were second to the Paul’s enthusiasm for bridge in Somerset

Norwegian gold medallists. was matched by that for cricket – his services

Armstrong was England’s most capped recognised by honorary memberships of

player in the Home Internationals in a EBUTA and Somerset County Cricket Club.

ship, and then gold at the European Championships in 1991. and good natured banter.

Armstrong was born in Ashbourne, Derbyshire, in 1952. Both his par- An ambassador for bridge and a champion for the less experienced

ents were school teachers and John learned bridge as a teenager. He player, he promoted friendly competition at every opportunity. As

obtained a First at Cambridge University in mathematics. After Somerset CBA development officer, he introduced new competitions into

University he moved to the Liverpool area for a job with Royal Insurance. the County programme and encouraged others to take up teaching and

tional was in 1978. They earned 31 Camrose appearances for England He will be greatly missed particularly by Anne Harris, his playing part-

concluding in 1997 when Kirby retired from international bridge to look ner and teaching colleague, and members of Wilton Bridge Club, which

after a young family. Armstrong had six internationals partnering Danny he ran so successfully for many years. While ever keen to improve

Davies before Davies took up a job in the United States. his own play, enjoying the game was always more important to Paul than

Armstrong then formed a partnership with Holland. Their first match any results. (Anne Harris)

Holland were also selected for a Home International weekend in 2007

and again in March this year, before the Europeans. IAN SPOORS

found great enjoyment with bridge and was a

town. Armstrong was keen on orienteering, a talented pianist and a

founder member of Brunton BC in 1973. His

devout catholic. He was both a gentle man and a gentleman, very well-

first success as a bridge player was winning

liked and respected in the bridge world.

the ‘Charity Challenge Sim Pairs’ in 1975

with Len Wood. Later on he developed a last-

and a sister. (Patrick Jourdain)

many NEBA events when his directing

commitments allowed. He worked with the

JOHN CATTANACH EBU for many years, and was promoted to

IT is with deep sadness that we have learned that things be ‘done proper’.

of the sudden death of John Cattanach. Steve Ray writes: It was soon after becoming a student at Newcastle that

John joined the Worcestershire CBA I first met Ian. I soon discovered he was a top bridge player and a rising star

committee some twenty years ago, and he was of tournament directing. He was fun although rather frustrating as a part-

involved in getting people interested in bridge ner but we normally did well. When asked about system, partners or agree-

for the whole of that time. He was at the ments, he would always say the same thing: ‘I will do as I am told.’ The only

forefront of bridge teaching in Worcestershire exception were first, third and fifth leads which were non-negotiable.

and campaigned actively for the promotion of Ian worked at a local private school, teaching a vast range of subjects at

the game both in the county and further a ridiculously low rate of pay. His intellect and knowledge inspired his

afield. Many players have John to thank pupils who missed him when he was let go as the class sizes became

for introducing them to our wonderful game, untenable. It is a tribute to the affection in which he was held that many

thereby enriching their lives. of his former pupils were to be found at his bedside, bringing their chil-

John was for many years the County’s dren, a source of great delight to Ian.

membership secretary, and was efficient in this as in all that he did. Many Ian pursued many interests – in classics, coins, organ music and sail-

years ago he also took over the county’s newsletter, expanded it, and ing, and working tirelessly on behalf of the NEBA and EBU. For many

increased its frequency. He was always a positive force on the committee, years he had been writing commentaries on the Latin poet Catullus,

ensuring that things were dealt with and standards were maintained. working from texts in Latin, French and German. His main regret would

In every sense John was a larger than life character: well over six feet tall, be not completing this work, but he made arrangements for it to be

with a voice – and his Scots burr – to match. Known to many bridge play- accessible to other Classical scholars.

ers, he was charming and responsive to them all. Partnering him was a joy – It was in some ways a source of sadness to Ian that he never found a

he would always tend to look for his own possible errors first. soul-mate and had children of his own. It is comforting to know that he

He will be very sorely missed and our heartfelt and deepest sympathies found great joy in his niece, Bronwen, and his nephew, Hedley jnr, who

go to his wife Rosemary and their family. (Joyce Skelton) were probably as close to him as his own kids might have been.