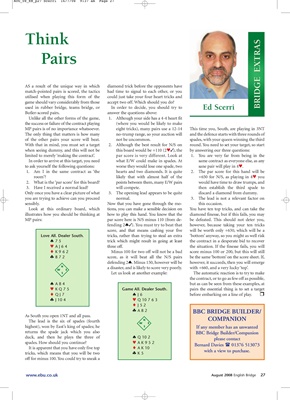 match-pointed pairs is scored, the tactics had time to signal to each other, or you

game should vary considerably from those accept two off. Which should you do?

used in rubber bridge, teams bridge, or In order to decide, you should try to Ed Scerri

Butler-scored pairs. answer the questions above:

Unlike all the other forms of the game, 1. Although your side has a 4-4 heart fit

MP pairs is of no importance whatsoever. eight tricks), many pairs use a 12-14 This time you, South, are playing in 3NT

The only thing that matters is how many no-trump range, so your auction will and the defence starts with three rounds of

of the other pairs your score will beat. not be uncommon. spades, with your queen winning the third

With that in mind, you must set a target 2. Although the best result for N/S on round. You need to set your target, so start

when seeing dummy, and this will not be this board would be +110 (2♥), the by answering our three questions:

limited to merely ‘making the contract’. par score is very different. Look at 1. You are very far from being in the

In order to arrive at this target, you need what E/W could make in spades. At same contract as everyone else, as any

to ask yourself the following questions: worse they would lose one spade, two sane pair will play in 4♥.

1. Am I in the same contract as ‘the hearts and two diamonds. It is quite 2. The par score for this hand will be

2. What is the ‘par score’ for this board? points between them, many E/W pairs would have time to draw trumps, and

3. Have I received a normal lead? will compete. then establish the third spade to

Only once you have a clear picture of what 3. The opening lead appears to be quite discard a diamond from dummy.

you are trying to achieve can you proceed normal. 3. The lead is not a relevant factor on

sensibly. Now that you have gone through the mo- this occasion.

Look at this ordinary board, which tions, you can make a sensible decision on You have ten top tricks, and can take the

illustrates how you should be thinking at how to play this hand. You know that the diamond finesse, but if this fails, you may

MP pairs: par score here is N/S minus 110 (from de- be defeated. This should not deter you,

fending 2♠ ). You must try to beat that however, because taking your ten tricks

score, and that means cashing your five will be worth only +630, which will be a

Love All. Dealer South. tricks, rather than trying to steal an extra ‘bottom’ anyway, so you might as well risk

♥AJ64 three off. the situation. If the finesse fails, you will

defending 2♠. Minus 150, however will be however, it succeeds, then you will emerge

S Let us look at another example: The automatic reaction is to try to make

the contract, or to go as few off as possible,

♠ A84 but as can be seen from these examples, at

♥ KQ75 Game All. Dealer South. pairs the essential thing is to set a target

As South you open 1NT and all pass.

The lead is the six of spades (fourth N COMPANION

highest), won by East’s king of spades; he S If any member has an unwanted

returns the spade jack which you also BBC Bridge Builder/Companion

duck, and then he plays the three of ♠ Q 10 2 please contact

spades. How should you continue? ♥ AK952

tricks, which means that you will be two ♣ K5

with a view to purchase.