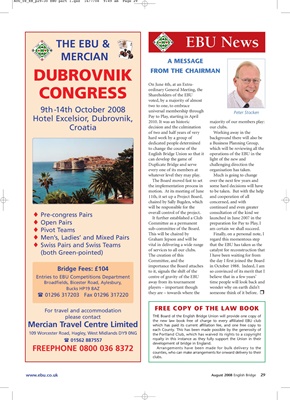 DUBROVNIK On June 4th, at an Extra-

Shareholders of the EBU

voted, by a majority of almost

two to one, to embrace

Pay to Play, starting in April

Hotel Excelsior, Dubrovnik, 2010. It was an historic majority of our members play:

Croatia decision and the culmination

of two and half years of very

Working away in the

hard work by a group of background there will also be

can develop the game of light of the new and

every one of its members at organisation has taken.

whatever level they may play. Much is going to change

the implementation process in some hard decisions will have

motion. At its meeting of June to be taken. But with the help

11th, it set up a Project Board, and cooperation of all

chaired by Sally Bugden, which concerned, and with

will be responsible for the continued and even greater

overall control of the project. consultation of the kind we

♦ Open Pairs Committee as a permanent preparation for Pay to Play, I

♦ Pivot Teams sub-committee of the Board. am certain we shall succeed.

This will be chaired by Finally, on a personal note, I

♦ Men’s, Ladies’ and Mixed Pairs Graham Jepson and will be regard this momentous step

of services to all our clubs. catalyst for reconstruction that

Committee, and the the day I first joined the Board

importance the Board attaches in October 1988. Indeed, I am

Bridge Fees: £104 to it, signals the shift of the so convinced of its merit that I

Broadfields, Bicester Road, Aylesbury, away from its tournament time people will look back and

they are – towards where the someone think of it before.

For travel and accommodation FREE COPY OF THE LAW BOOK

Mercian Travel Centre Limited which has paid its current affiliation fee, and one free copy to

each County. This has been made possible by the generosity of

109 Worcester Road, Hagley, West Midlands DY9 0NG the Portland Club, which has waived its rights to a copyright

development of bridge in England.

counties, who can make arrangements for onward delivery to their