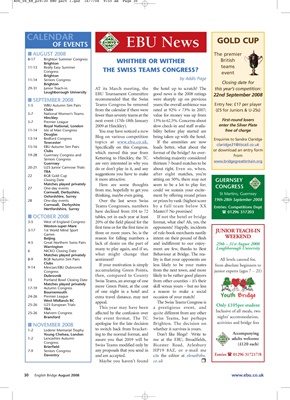 Brighton WHITHER OR WITHER

29-31 Junior Teach-in AT its March meeting, the the hotel up to scratch? The this year’s competition:

13-14 Bedford Congress Blog on various competition being taken up with the hotel.

Towcester topics at www.ebu.co.uk. If the amenities are now

Specifically on this Congress, loads better, what about the

which moved this year from format of the bridge? An over-

19-28 Guernsey Congress and from

22 BGB Gold Cup suggestions you have to make after eight matches, you’re

Closing Date it more attractive. sitting on 50%, there may not GUERNSEY

Matches played privately Here are some thoughts seem to be a lot to play for;

from me, hopefully to get you could we sustain your excite-

I OCTOBER 2008 tables, yet in each year at least If not the hotel or bridge

3-5 West of England Congress 20% of the field played for the format, what else? Ah, yes, the

three or more years. So, is the of rule-book merchants nastily JUNIOR TEACH-IN

many to play again, and if so, ment are few, thanks to Best

Matches played privately what might change that Behaviour at Bridge. The rea-

8-9 BGB Autumn Sim Pairs sentiment? lity is that your opponents are All levels catered for,

from absolute beginners to

Congress accumulating Green Points, from the next town, and more junior experts (ages 7 – 21)

Dubrovnik then, compared to County likely to be rather good players

13 Portland Bowl Closing Date Swiss Teams, an average of one from other counties – it’s their

more Green Point, at the cost skill versus yours – but no less

24-26 Premier League extra travel distance, may not occasion of your match!

West Midlands BC appeal. The Swiss Teams Congress is

This year may have been a prestigious event, and

25-26 Malvern Congress affected by the confusion over quite different from any other Inclusive of all meals, two

I NOVEMBER 2008 apologise for the late decision Brighton. The decision on

1-2 Lederer Memorial Trophy to switch back from bracket- whether it survives is yours.

Young Chelsea, London ing to the normal format, and Don’t like Blogs? Write to Accompanying

1-2 Lancashire Autumn assure you that 2009 will be me at the EBU, Broadfields, adults welcome

7-9 Seniors Congress any proposals that you send in HP19 8AZ, or e-mail me