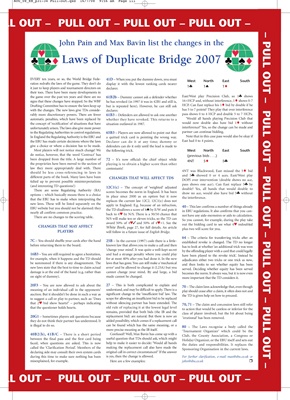 John Pain and Max Bavin list the changes in the

EVERY ten years, or so, the World Bridge Fede- 41D – When you put the dummy down, you must West North East South

ration redrafts the laws of the game. They don’t do display it with the lowest ranking cards nearer

their toes. There have been many developments in

the game over the past ten years and there are no 61B2b – Dummy cannot ask a defender whether East/West play Precision Club, so 1♣ shows

Drafting Committee has to ensure the laws keep up but is repeated here). However, he can still ask HCP. Can East replace his 1♦ bid by double if he

with the changes. The new laws give TDs conside- declarer. has 5 to 7 points? They play that over interference

rably more discretionary powers. There are fewer 61B3 – Defenders are allowed to ask one another pass shows 0 to 4 HCP and double 5 to 7 HCPs.

automatic penalties, which have been replaced by whether they have revoked. This returns to a ‘Would all hands playing Precision Club that

the concept of ‘rectification’ of situations that have situation outlawed in 1987. would now double also have bid 1♦ without

unfortunately arisen. The laws also give more power interference?’ Yes, so the change can be made and

to the Regulating Authorities to control regulations. 65B3 – Players are now allowed to point out that partner can continue bidding.

In England the Regulating Authority is the EBU and a quitted trick card is pointing the wrong way. Note that in this case pass would also be okay if

the EBU has made certain decisions where the laws Declarer can do it at any time; dummy or East had 0 to 4 points.

give a choice or where a decision has to be made. defenders can do it only until the lead is made to

Most players will not notice much change! We the following trick. West North East South

do notice, however, that the word ‘Contract’ has (previous bids . . .)

law they more appropriately deal with. There contestants!

should be less cross-referencing to laws in 4NT was Blackwood, East missed the 5♦ bid

different parts of the book. Many laws have been and 5♣ showed 0 or 4 aces. East/West play

CHANGES THAT WILL AFFECT TDS DOPI over intervention (double shows no ace,

tidied up to prevent possible misinterpretations

(and interesting TD questions!) pass shows one ace). Can East replace 5♣ by

12C1(c) – The concept of ‘weighted’ adjusted double? Yes, all hands that would double to

There are some Regulating Authority (RA) scores becomes the norm in England. It has been

options – which basically means there is a choice show no ace, would also have bid 5♣ without

in place since 2000 as an option but it now the interference.

that the EBU has to make when interpreting the replaces the current law 12C2. 12C1(e) does not

new laws. These will be listed separately on the apply in England. E.g. because of an infraction,

EBU website but you should not be alarmed: they 40 – This law confirms a number of things already

the TD disallows a score of 4♠ by E/W and puts it in EBU regulations. It also confirms that you can-

There are no changes to the scoring table. not have any aide-memoires or aids to calculation.

N/S will make ten or eleven tricks, so the TD can So you cannot, for example, during the play take

CHANGES THAT MAY AFFECT White Book, page 27, for full details. An article plus two will score for you.

PLAYERS will follow in a future issue of English Bridge.

64 – The criteria for transferring tricks after an

7C – You should shuffle your cards after the hand 25B – In the current (1997) code there is a little- established revoke is changed. The TD no longer

before returning them to the board. known law that allows you to make a call and then has to look at whether ‘an additional trick was won

‘change your mind’. It was quite a well-kept secret by the offending player with a card that could legally

16B3 – You are still required to agree a hesitation, and had a strange penalty where you could play have been played to the revoke trick’. Instead he

for example, when it happens and the TD should for at most 40% after you had done it. In the new adjudicates either two tricks or one trick as now,

be summoned if there is any disagreement. The laws that has gone. You can still make a ‘mechanical and then looks to see whether equity has been

new laws state that the best to time to claim actual error’ and be allowed to change it (L25A) but you served. Deciding whether equity has been served

damage is at the end of the hand (e.g. rather than cannot change your mind. By and large, a bid becomes the norm. It always was, but it is now even

on sight of dummy). made cannot be changed. more important that the TD considers it.

20F3 – You are now allowed to ask about the 27 – This is both complicated to explain and 70 – The claim laws acknowledge that, even though

meaning of an individual call in the opponents’ understand, and may be difficult to apply. There is a play should cease after a claim, it often does not and

auction. But it shouldn’t be done in such a way as significant change to the ‘insufficient bid’ law. The the TD is given help on how to proceed.

to suggest a call or play to partner, such as: ‘Does scope for allowing an insufficient bid to be replaced

that 2♥ bid show hearts?’ – perhaps indicating without silencing partner has been extended. The 70, 71 – The claim and concession laws still refer

that the questioner holds hearts. old rule of replacing it at the lowest legal level to action that would be careless or inferior for the

remains, provided that both bids (the IB and the class of player involved, but the bit about being

20G1 – Sometimes players ask questions because replacement bid) are natural. But there is now an ‘irrational’ has been removed.

they do not think their partner has understood. It added possibility, which comes if a replacement call

is illegal to do so. can be found which has the same meaning, or a 80 – The Laws recognise a body called the

more precise meaning as the IB itself. ‘Tournament Organizer’ which could be the

40B2(b), 41B/C – There is a short period Confused? Well, Max Bavin has come up with a Club, the County Association, a Congress or

between the final pass and the first card being useful question that TDs should ask, which might Holiday Organizer, or the EBU itself and sets out

faced, when questions are asked. This is now help to make it easier to decide: ‘Would all hands the duties and responsibilities. It replaces the

called the ‘Clarification Period’. Members of the making the replacement call also have made the Sponsoring Organisation in the current laws.

declaring side may consult their own system cards original call in correct circumstances?’ If the answer

during this time to make sure nothing has been is yes, then the change is allowed. For further clarification, e-mail max@ebu.co.uk or

misexplained, for example. Here are a few examples: john@ebu.co.uk