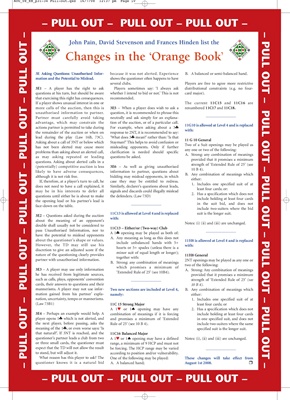 Changes in the ‘Orange Book’

3E Asking Questions: Unauthorised Infor- because it was not alerted. Experience B. A balanced or semi-balanced hand.

mation and the Potential to Mislead. shows the questioner often happens to have

3E1 – A player has the right to ask Players sometimes say: ‘I always ask distributional constraints (e.g. no four-

questions at his turn, but should be aware whether I intend to bid or not.’ This is not card major).

that exercising this right has consequences. recommended.

unauthorised information to partner. question, it is recommended to phrase this

advantage, which may constrain the tion of the auction, or of a particular call.

actions partner is permitted to take during For example, when asking about a 3♣

the remainder of the auction or when on response to 2NT, it is recommended to say:

Asking about a call of 3NT or below which Stayman?’ This helps to avoid confusion or

Two of a Suit openings may be played as

has not been alerted may cause more misleading opponents. Only if further

any one or two of the following:

problems than asking about an alerted call, clarification is needed should specific

A. Strong: any combination of meanings

as may asking repeated or leading questions be asked.

provided that it promises a minimum

questions. Asking about alerted calls in a

strength of ‘Extended Rule of 25’ (see

likely to have adverse consequences, information to partner, questions about

B. Any combination of meanings which

although it is not risk free. bidding may mislead opponents, in which

If, therefore, at a player’s turn to call, he case they may be entitled to redress.

1. Includes one specified suit of at

does not need to have a call explained, it Similarly, declarer’s questions about leads,

2. Has a specification which does not

questions until either he is about to make the defenders. (Law 73D)

include holding at least four cards

the opening lead or his partner’s lead is

face-down on the table.

include two-suiters where the bid

11C13 is allowed at Level 4 and is replaced suit is the longer suit.

3E2 – Questions asked during the auction

about the meaning of an opponent’s

double shall usually not be considered to

A 1♣ opening may be played as both of:

have the potential to mislead opponents

A. Any meaning as long as this does not

about the questioner’s shape or values. 11H8 is allowed at Level 4 and is replaced

include unbalanced hands with 5+

However, the TD may still use his with:

hearts or 5+ spades (unless there is a

discretion to give an adjusted score if the

partner with unauthorised information. 2NT openings may be played as any one or

B. Strong: any combination of meanings

two of the following:

which promises a minimum of

3E3 – A player may use only information A. Strong: Any combination of meanings

he has received from legitimate sources, provided that it promises a minimum

cards, their answers to questions and their 10 B 4).

mannerisms. A player may not use infor- Two new sections are included at Level 4, B. Any combination of meanings which

mation gained from his partner’ expla- namely: either:

nation, uncertainty, tempo or mannerisms. 1. Includes one specified suit of at

A 1♥ or 1♠ opening may have any 2. Has a specification which does not

3E4 – Perhaps an example would help. A combination of meanings if it is forcing include holding at least four cards

player opens 1♣ which is not alerted, and and promises a minimum of ‘Extended in one specified suit, and does not

the next player, before passing, asks the Rule of 25’ (see 10 B 4). include two-suiters where the same

meaning of the 1♣, or even worse says: ‘Is specified suit is the longer suit.

questioner’s partner leads a club from two A 1♥ or 1♠ opening may have a defined Notes: (i), (ii) and (iii) are unchanged.

or three small cards, the questioner must range, a minimum of 9 HCP and must not

to stand, but will adjust it. according to position and/or vulnerability.

What reason has this player to ask? The One of the following may be played: These changes will take effect from

questioner knows it is a natural bid A. A balanced hand; August 1st 2008.