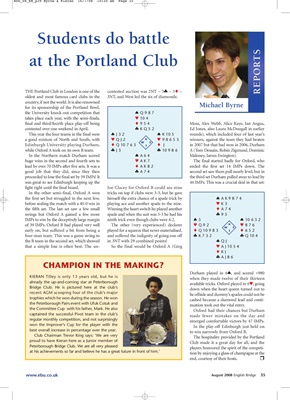 at the Portland Club

oldest and most famous card clubs in the 3NT, and West led the six of diamonds:

country, if not the world. It is also renowned

for its sponsorship of the Portland Bowl, Michael Byrne

the University knock-out competition that ♠ Q987

a good mixture of North and South, with ♥ QJ2 N ♥ 98653 winners, against the team they had beaten

In the Northern match Durham scored ♠ A 64 Maloney, James Ewington).

huge wins in the second and fourth sets to ♥ A K7 The final started badly for Oxford, who

good job that they did, since they then ♣ A 74 second set saw them pull nearly level, but in

proceeded to lose the final set by 59 IMPs! It the third set Durham pulled away to lead by

was great to see Edinburgh keeping up the 44 IMPs. This was a crucial deal in that set:

fight right until the final board. Joe Clacey for Oxford B could see nine

In the other semi-final, Oxford A won tricks on top if clubs were 3-3, but he gave

the first set but struggled in the next few, himself the extra chance of a spade trick by ♠ AK9874

before sealing the match with a 40-0 win in playing ace and another spade to the nine. ♥ K3

the fifth set. The last set saw a few small Winning the heart switch he played another ♦ A74

of 39 IMPs. Oxford B had played very well The other (very experienced) declarer ♥ Q92 W

the B team in the second set, which showed in 3NT with 29 combined points! ♠ QJ

CHAMPION IN THE MAKING?

KIERAN Tilley is only 13 years old, but he is when they made twelve of their thirteen

Bridge Club. He is pictured here at the club’s down when the heart queen turned out to

trophies which he won during the season. He won cashed because a diamond lead and conti-

the Peterborough Pairs event with Ufuk Cotuk and nuation took out the vital entry.

the Committee Cup with his father, Mark. He also Oxford had their chances but Durham

regular monthly competition, and not surprisingly

best overall increase in percentage over the year. to win narrowly from Oxford B.

Club Chairman Trevor King says: ‘We are very The hospitality provided by the Portland

proud to have Kieran here as a Junior member of Club made it a great day for all, and the

Peterborough Bridge Club. We are all very pleased players honoured the spirit of the competi-

at his achievements so far and believe he has a great future in front of him.’ tion by enjoying a glass of champagne at the

end, courtesy of their hosts.