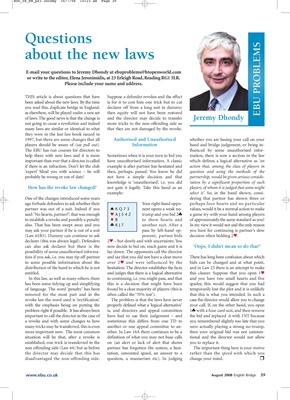 about the new laws

been asked about the new laws. By the time is for it to cost him one trick but to cut

you read this, duplicate bridge in England, declarer off from a long suit in dummy;

as elsewhere, will be played under a new set then equity will not have been restored

of laws. The good news is that the change is and the director may decide to transfer Jeremy Dhondy

many laws are similar or identical to what that they are not damaged by the revoke.

they were in the last law book issued in

1997, but there are some changes that all Authorised and Unauthorised whether you are basing your call on your

players should be aware of (see pull out). Information hand and bridge judgement, or being in-

help them with new laws and it is more Sometimes when it is your turn to bid you mation, there is now a section in the law

important than ever that a director is called have unauthorised information. A classic which defines a logical alternative as ‘an

if there is an infraction. Don’t let the club example is after partner has hesitated and action that, among the class of players in

‘expert’ blind you with science – he will then, perhaps, passed. You know he did question and using the methods of the

probably be wrong or out of date! not have a simple decision and that partnership, would be given serious conside-

knowledge is ‘unauthorised’, i.e. you did ration by a significant proportion of such

How has the revoke law changed? not gain it legally. Take this hand as an players, of whom it is judged that some might

example: select it’. So, in the hand shown, consi-

partner was out of a suit. Indeed if you ♠ KQ73 nent opens a weak no- values, would it be a normal action to make

said: ‘No hearts, partner?’, that was enough ♥ AJ542 trump and you bid 2♣ a game try with your hand among players

to establish a revoke and possibly a penalty ♦ 8 to show hearts and of approximately the same standard as you?

also. That has been swept away and you ♣ KJ7 another suit. After a In my view it would not and the only reason

(Law 61B3). Dummy can continue to ask ponent, partner bids decision when bidding 2♥.

declarer (this was always legal). Defenders 2♥ – but slowly and with uncertainty. You

can also ask declarer but there is the now decide to bid on, reach game and it is ‘Oops, I didn’t mean to do that!’

possibility of some unauthorised informa- lay-down. The opponents call the director

tion if you ask, i.e. you may tip off partner and say that you did not have a clear move There has long been confusion about which

to some possible information about the over 2 ♥ and were influenced by the bids can be changed and at what point,

distribution of the hand to which he is not hesitation. The director establishes the facts and in Law 25 there is an attempt to make

entitled. and judges that there is a logical alternative this clearer. Suppose that you open 1♥

In this law, as well as many others, there to continuing, i.e. you might pass, and that and you have two small hearts and five

has been some tidying up and simplifying this is a decision that might have been spades; this would suggest that you had

of language. The word ‘penalty’ has been found by a clear majority of players (this is temporarily lost the plot and it is unlikely

removed for the most part and in the often called the ‘70% test’). that this is what you intended. In such a

with the emphasis being on putting the properly defined what a ‘logical alternative’ your call. If, on the other hand, you open

problem right if possible. It has always been is, and directors and appeal committees 1♣ with a four card suit, and then remove

many tricks may be transferred, this is even another or one appeal committee to an- were actually playing a strong no-trump,

more important now. The most common other. In Law 16A there continues to be a then your original bid was not uninten-

situation will be that, after a revoke is definition of what you may not base calls tional and the director would not allow

established, one trick is transferred to the on (an alert or lack of alert that shows you to replace it.

non offending side (Law 64) but as before partner has forgotten the system, a hesi- The important thing here is your motive

the director may decide that this has tation, unwonted speed, an answer to a rather than the speed with which you

disadvantaged the non-offending side. question, a mannerism etc). In judging change your mind.