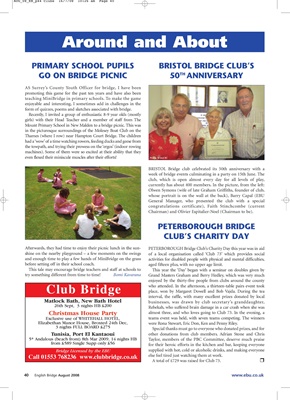 AS Surrey’s County Youth Officer for bridge, I have been

teaching MiniBridge in primary schools. To make the game

enjoyable and interesting, I sometimes add in challenges in the

form of quizzes, poems and sketches associated with bridge.

Recently, I invited a group of enthusiastic 8-9 year olds (mostly

Mount Primary School in New Malden to a bridge picnic. This was

in the picturesque surroundings of the Molesey Boat Club on the

Thames (where I row) near Hampton Court Bridge. The children

had a ‘wow’ of a time watching rowers, feeding ducks and geese from

the towpath, and trying their prowess on the ‘ergos’ (indoor rowing

machines). Some of them were so excited at their ability that they

even flexed their miniscule muscles after their efforts! Photo: Bristol BC

BRISTOL Bridge club celebrated its 50th anniversary with a

week of bridge events culminating in a party on 15th June. The

club, which is open almost every day for all levels of play,

currently has about 400 members. In the picture, from the left:

whose portrait is on the wall at the back), Barry Capal (EBU

General Manager, who presented the club with a special

Chairman) and Olivier Espitalier-Noel (Chairman to be).

Afterwards, they had time to enjoy their picnic lunch in the sun- PETERBOROUGH Bridge Club’s Charity Day this year was in aid

and enough time to play a few hands of MiniBridge on the grass activities for disabled people with physical and mental difficulties,

before setting off in their school coach. aged fifteen plus, with no upper age limit.

try something different from time to time! Bomi Kavarana Grand Masters Graham and Berry Hedley, which was very much

enjoyed by the thirty-five people from clubs around the county

Club Bridge who attended. In the afternoon, a thirteen-table pairs event took

place, won by Margaret Dowell and Bob Vajda. During the tea

interval, the raffle, with many excellent prizes donated by local

26th Sept, 3 nights HB £200 Rebekah, who suffered brain damage in a car crash when she was

Christmas House Party almost three, and who loves going to Club 73. In the evening, a

Exclusive use of WHITEHALL HOTEL, teams event was held, with seven teams competing. The winners

3 nights FULL BOARD £275 Special thanks must go to everyone who donated prizes, and for

from £589 Single Supp only £56 for their heroic efforts in the kitchen and bar, keeping everyone

Bridge Licensed by the EBU supplied with hot, cold or alcoholic drinks, and making everyone