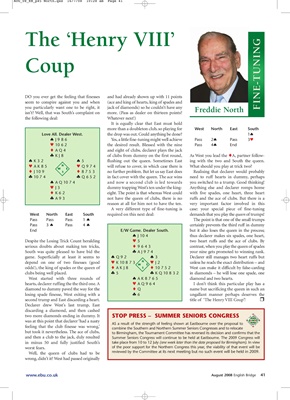 seem to conspire against you and when (ace and king of hearts, king of spades and

you particularly want one to be right, it jack of diamonds) so he couldn’t have any

isn’t? Well, that was South’s complaint on more. (Pass as dealer on thirteen points? Freddie North

the following deal: Whatever next!)

It is equally clear that East must hold

more than a doubleton club, so playing for West North East South

Love All. Dealer West. the drop was out. Could anything be done? 1♠

♦AQ4 and eight of clubs, declarer plays the jack

♣KJ8 of clubs from dummy on the first round, As West you lead the ♦A, partner follow-

♠ K32 ♠5 flushing out the queen. Sometimes East ing with the two and South the queen.

♥Q974 will refuse to cover, in which case there is What should you play at trick two?

♦ J 10 9 S ♦8753 no further problem. But let us say East does Realising that declarer would probably

♦K62 eight. The point is that whereas West could with five spades, one heart, three heart

♣A93 not have the queen of clubs, there is no ruffs and the ace of clubs. But there is a

reason at all for him not to have the ten. very important factor involved in this

West North East South required on this next deal: demands that you play the queen of trumps!

End E/W Game. Dealer South. but it also loses the queen in the process;

Despite the Losing Trick Count heralding ♥5 two heart ruffs and the ace of clubs. By

serious doubts about making ten tricks, ♦9643 contrast, when you play the queen of spades

South was quite pleased to have bid the ♣AJ974 your nine gets promoted to winning rank.

hearts, declarer ruffing the the third one. A ♥AQ964 I don’t think this particular play has a

second trump and East discarding a heart. title of ‘The Henry VIII Coup’!

discarding a diamond, and then cashed

was at this point that declarer ‘had a nasty

feeling that the club finesse was wrong,’ combine the Southern and Northern Summer Seniors Congresses and to relocate

but took it nevertheless. The ace of clubs, to Birmingham, the Tournament Committee has reversed its decision and confirms that the

and then a club to the jack, duly resulted Summer Seniors Congress will continue to be held at Eastbourne. The 2009 Congress will

in minus 50 and fully justified South’s take place from 10 to 12 July (one week later than the date proposed for Birmingham). In view

worst fears. of the poor support for the Northern Congress this year, the viability of that event will be

Well, the queen of clubs had to be reviewed by the Committee at its next meeting but no such event will be held in 2009.