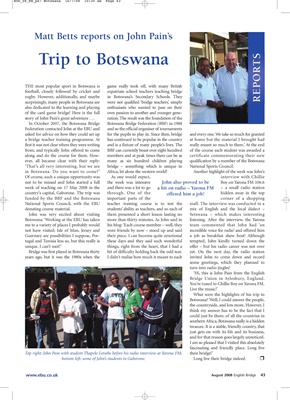 THE most popular sport in Botswana is game really took off, with many British

rugby. However, additionally, and maybe in Botswana’s Secondary Schools. They

surprisingly, many people in Botswana are were not qualified ‘bridge teachers’, simply

of the card game bridge! Here is the full own passion to another and younger gene-

story of John Pain’s great adventure . . . ration. The result was the foundation of the

asked for advice on how they could set up for the pupils to play in. Since then, bridge and every one. We take so much for granted

a bridge teacher training programme. At has continued to be popular in the country at home but the material I brought had

first it was not clear where they were writing and is a fixture of many people’s lives. The really meant so much to them.’ At the end

from, and typically John offered to come BBF can currently boast over eight hundred of the course each student was awarded a

along and do the course for them. How- members and at peak times there can be as certificate commemorating their new

ever, all became clear with their reply: many as six hundred children playing qualification by a member of the Botswana

‘That’s all very interesting, but we are bridge – something which is unique in National Sports Council.

in Botswana. Do you want to come?’ Africa, let alone the western world! Another highlight of the week was John’s

Of course, such a unique opportunity was As one would expect, interview with Chillie

not to be missed and John started a full the week was intensive John also proved to be Boy on Yarona FM 106.6

country’s capital, Gaborone. The trip was through. One of the offered him a job! hidden away in the top

National Sports Council, with the EBU teacher training course is to test the mall. The interview was conducted in a

donating course material. students’ ability as teachers, and so each of mix of English and the local dialect –

Botswana: ‘Working at the EBU has taken more than thirty minutes. As John said in listening. After the interview, the Yarona

me to a variety of places I probably would his blog: ‘Each course member – well, they team commented that John had ‘an

not have visited; Isle of Man, Jersey and were friends by now – stood up and said incredible voice for radio’ and offered him

Guernsey are possibilities I suppose, Por- their piece. I can become quite emotional a job as breakfast show host! Although

tugal and Tunisia less so, but this really is these days and they said such wonderful tempted, John kindly turned down the

unique. I can’t wait!’ things, right from the heart, that I had a offer – but his radio career was not over

Bridge was first played in Botswana thirty bit of difficulty holding back the odd tear. yet. On the next day, the radio station

years ago, but it was the 1980s when the I didn’t realise how much it meant to each invited John to come down and record

some greetings, which they planned to

‘Hi, this is John Pain from the English

What were the highlights of his trip to

Botswana? ‘Well, I could answer the people,

the countryside, and lots more. However, I

think my answer has to be the fact that I

could just be there; of all the countries in

treasure. It is a stable, friendly country, that

just gets on with its life and its business,

and for that reason goes largely unnoticed.

I am so pleased that I visited this absolutely

bottom left: some of John’s students in Gaborone. Long live their bridge indeed.