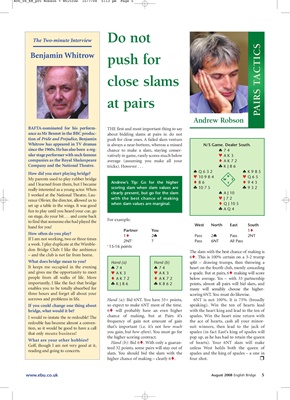 The Two-minute Interview Do not

ance as Mr Bennet in the BBC produc- about bidding slams at pairs is: do not

tion of Pride and Prejudice, Benjamin push for close ones. A failed slam venture

Whitrow has appeared in TV dramas is always a near-bottom, whereas a missed N/S Game. Dealer South.

ular stage performer with such famous vatively in game, rarely scores much below ♥AK3

I worked at the National Theatre, Lau- clearly present, but go for the slam ♠ A J 10

rence Olivier, the director, allowed us to with the best chance of making ♥J72

fun to play until you heard your cue, go ♣AQ4

to find that someone else had played the For example:

If I am not working, two or three times 2NT1 ? Pass 6NT All Pass

a week. I play duplicate at the Wimble- 1

don Bridge Club: I like the ambience The slam with the best chance of making is

What does bridge mean to you? Hand (a) Hand (b) split – drawing trumps, then throwing a

It keeps me occupied in the evening ♠74 ♠74 heart on the fourth club, merely conceding

and gives me the opportunity to meet ♥AK3 ♥AK3 a spade. But at pairs, 6♦ making will score

people from all walks of life. More ♦AK72 ♦AK72 below average. Yes – with 33 partnership

importantly, I like the fact that bridge ♣KJ86 ♣K862 points, almost all pairs will bid slam, and

three hours and forget all about your scoring 6NT. You must do likewise.

If you could change one thing about so expect to make 6NT most of the time. speaking). Win the ten of hearts lead

bridge, what would it be? 6♦ will probably have an even higher with the heart king and lead to the ten of

I would re-instate the re-redouble! The chance of making, but at Pairs it’s spades. Win the heart nine return with

redouble has become almost a conven- frequency of gain not amount of gain the ace of hearts, cash all your minor-

tion, so it would be good to have a call that’s important (i.e. it’s not how much suit winners, then lead to the jack of

that only means business! you gain, but how often). You must go for spades (in fact East’s king of spades will

the higher scoring contract. pop up, as he has had to retain the queen

What are your other hobbies?

Golf, though I am not very good at it,

teed 32 points, some pairs will stay out of unless West holds both the queen of

reading and going to concerts.

slam. You should bid the slam with the spades and the king of spades – a one in