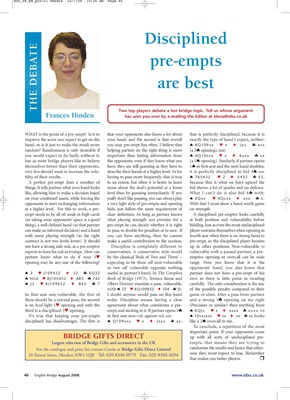 Frances Hinden has won you over by e-mailing the Editor at elena@ebu.co.uk

WHAT is the point of a pre-empt? Is it to that your opponents also know a lot about that is perfectly disciplined, because it is

improve the score you expect to get on the your hand, and the second is that overall exactly the type of hand I expect, neither:

random? Randomness is only desirable if helping partner do the right thing is more (a 2♠ opening), nor:

you would expect to do badly without it, important than hiding information from ♠ AQ10xxx ♥ x ♦ Kxxx ♣ xx

but as most bridge players like to believe the opponents: even if they know what you (a 1♠ opening). Similarly, if partner opens

themselves better than their opponents, have, they are still guessing as they have to 1♠ in first seat and the next hand doubles,

very few should want to increase the vola- describe their hands at a higher level. As for it is perfectly disciplined to bid 4♠ on:

A perfect pre-empt does a number of to an extent, but often it is better to learn because that it what we have agreed the

things. It tells partner what your hand looks more about the deal’s potential at a lower bid shows: a lot of spades and no defence.

like, allowing him to make a decision based level than by guessing immediately. If you What I can’t do is also bid 4 ♠ with:

at a higher level. For this to work, a pre- bids; just follow the same requirement of on strength.

empt needs to be all of: weak in high cards clear definition. As long as partner knows A disciplined pre-emptor looks carefully

thing), a well-defined hand (so that partner pre-empt he can decide whether it is right bidding. Just as even the most undisciplined

can make an informed decision) and a hand to pass, to double for penalties or to save. If player restrains themselves when opening in

with some playing strength (so the right you can have anything, then he cannot fourth seat when there is no strong hand to

contract is not two levels lower). It should make a useful contribution to the auction. pre-empt, so the disciplined player loosens

not have a strong side-suit, as a pre-emptor Discipline is completely different to up in other positions. Non-vulnerable vs

expects to have his suit as trumps. How can conservatism. A conservative style would vulnerable with a passed partner, a pre-

opening may be any one of the following? expecting to be three off non-vulnerable range. Now you know that it is the

or two off vulnerable opposite nothing opponents’ hand; you also know that

In first seat non-vulnerable, the first of I doubt anyone would pass on this hand game or slam. After a pass from partner

these should be a normal pass, the second today. Discipline means having a clear and a strong 1♣ opening on my right

To conclude, a repetition of the most

important point. If your opponents come

BRIDGE GIFTS DIRECT up with all sorts of undisciplined pre-

Largest selection of Bridge Gifts and accessories in the UK empts, that means they are trying to

that makes you better players.