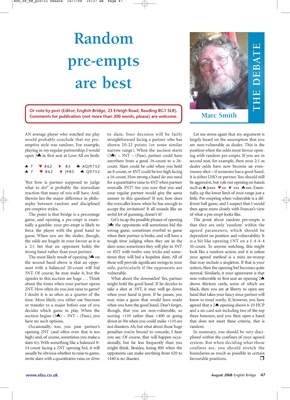 Comments for publication (not more than 200 words, please) are welcome. Marc Smith

AN average player who watched me play to slam. Your decision will be fairly Let me stress again that my argument is

emptive style was random. For example, shown 20-22 points (or some similar are non-vulnerable as dealer. This is the

playing in my regular partnership, I would narrow range). When the auction starts position when the odds most favour open-

a 16-count. How strong a hand do you need it is either LHO or partner. You should still

‘But how is partner supposed to judge for a quantitative raise to 4NT when partner be aggressive, but rule out opening on hands

reaction that many of you will have. And, your regular partner would give the same tially, up the lower limit of your range just a

therein lies the major difference in philo- answer to this question? If not, how does little. Pre-empting when vulnerable is a dif-

sophy between random and disciplined the overcaller know when he has enough to ferent ball game, and I suspect that I would

pre-emptive styles. accept the invitation? It all sounds like an then agree more closely with Frances’s view

The point is that bridge is a percentage awful lot of guessing, doesn’t it? of what a pre-empt looks like.

game, and opening a pre-empt is essen- Let’s recap the possible plusses of opening The point about random pre-empts is

tially a gamble: your pre-empt is likely to 3♣: the opponents will sometimes bid the that they are only ‘random’ within the

force the player with the good hand to wrong game, sometimes overbid to game agreed parameters, which should be

guess. When you are the dealer, though, when their partner is broke, and will have a dependent on position and vulnerability. It

a 2:1 bet that an opponent holds the slam zone; sometimes they will play in 3NT 10-count. To anyone watching, this might

strong hand rather than your partner. or 4NT with twelve easy tricks and some- look like a random action, and it is unless

The most likely result of opening 3♣ on times they will bid a hopeless slam. All of your agreed method is a mini no-trump

the second hand above is that an oppo- these will provide significant swings to your that may include a singleton. If that is your

nent with a balanced 20-count will bid side, particularly if the opponents are system, then the opening bid becomes quite

3NT. Of course, he may make it, but the vulnerable. normal. Similarly, it your agreement is that

upsides to this auction are huge . . . Think What about the downsides? Yes, partner non-vulnerable in first seat an opening 2♠

about the times when your partner opens might hold the good hand. If he decides to shows thirteen cards, some of which are

2NT. How often do you just raise to game? take a shot at 3NT, it may well go down black, then you are at liberty to open any

I doubt it is as often as a quarter of the when your hand is poor. If he passes, you hand that takes your fancy since partner will

time. More likely, you either use Stayman may miss a game that would have made know to tread warily. If, however, you have

or transfer to a major before one of you when you have the good hand. Don’t forget, agreed that a 2♠ opening shows 6-10 HCP

decides which game to play. When the though, that you are non-vulnerable, so and a six-card suit including two of the top

have no such options. down in 50s when you could make +110 are that does not meet these criteria, that is

Occasionally, too, you pass partner’s not disasters. Ah, but what about those huge random.

opening 2NT (and often even that is too penalties you’re bound to concede, I hear In summary, you should be very disci-

high) and, of course, sometimes you make a you say. Of course, that will happen occa- plined within the confines of your agreed

slam try. With something like a balanced 8- sionally, but far less frequently than you system. But when deciding what those

14 count facing a 2NT opening bid, it will might think. Besides, losing 800 when the confines are, you should stretch the

usually be obvious whether to raise to game, opponents can make anything from 620 to boundaries as much as possible in certain

invite slam with a quantitative raise, or drive 1440 is no disaster. favourable positions.