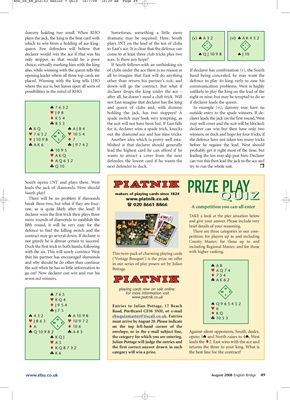 queen. Few defenders will believe that to East's ace. It is clear that the defence can S S

only stopper, so that would be a poor aces. Is there any hope?

choice, virtually marking him with the king If South follows with an unthinking six

also, while winning with the queen tells the of clubs under the ace there is no reason at If declarer has combination (v), the South

opening leader where all three top cards are all to imagine that East will do anything hand being concealed, he may want the

placed. Winning with the king tells LHO other than return his partner's suit, and defence to play its king early to ease his

where the ace is, but leaves open all sorts of down will go the contract. But what if communication problems. West is highly

possibilities in the mind of RHO. declarer drops the king under the ace – unlikely to play the king on the lead of the

after all, he doesn't need a club trick. Will eight or nine, but may be tempted to do so

not East imagine that declarer has the king if declarer leads the queen.

♥ J98 holding the jack, has two stoppers? A outside entry to the spade winners. If de-

♦ K54 spade switch may look very tempting, as clarer leads the jack on the first round, West

♠ KQ ♠ AJ84 for it, declarer wins a spade trick, knocks declarer can win but then have only two

♥ 10 5 4 out the diamond ace and has nine tricks. winners, or duck and hope for four tricks, if

♣ AK6 ♣ J9742 blished is that declarer should generally before he regains the lead. West should

♠ 10 9 5 lead the highest card he can afford if he probably get it right most of the time, but

♥ AKQ wants to attract a cover from the next leading the ten may slip past him. Declarer

♦ AQ632 defender, the lowest card if he wants the can run this then lead the jack to the ace and

leads the jack of diamonds. How should

There will be no problem if diamonds www.piatnik.co.uk

one, as is quite likely after the lead? If A competition you can all enter

more rounds of diamonds to establish the and give your answer. Please include very

fifth round, it will be very easy for the brief details of your reasoning.

contract may go several down. If declarer is petition: for players up to and including

not greedy he is almost certain to succeed. County Master; for those up to and

Duck the first trick in both hands, following including Regional Master; and for those

with the six. This will surely convince West This twin-pack of charming playing cards with higher ranking.

the suit when he has so little information to ♠ A8

♠KQJ the category for which you are entering. opens 3♠ and North raises to 4♠. West

♥A5 Julian Pottage will judge the entries and leads the ♦2. East wins with the ace and

♦KQ8 732 the first correct answer drawn in each returns the three to your king. What is

♣K6 category will win a prize. the best line for the contract?