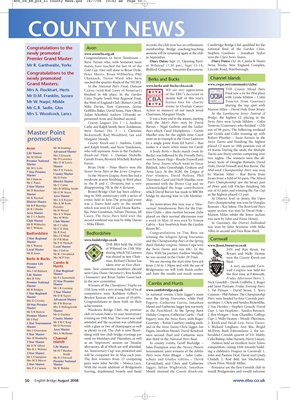 COUNTY NEWS records, the club now has an enthusiastic Cambridge Bridge Club qualified for the

Congratulations to the Avon membership. Bridge coaching/teaching national final of the Garden Cities.

reached the quarter-finals of the NICKO.

Mrs A. Flockhart, Herts Cairns (with Rob Lawy of Somerset) WE are very appreciative THE County Mixed Pairs

finished in 6th place. In the Garden of the EBU’s decision to Final saw a tie for first place

Griffiths-Baker, David Jones, Huw Oliver, Action in memory of our much loved

presented Avon and finished second. It was a busy end to the season, starting Bridge, the highest CI placing in the

promotions Margaret Mundy. went on to triumph in the Victor Ludorum Robert Plumley – Susie Farnon in the

Swiss Teams and finishing the highest

County Knock-out: 1. Andrew, Cathy by a single point from Ed Scerri – that

and Ralph Smith, and Steve Tomlinson, makes it a mere seven times for Carol! placed CI team in 18th position out of

Advanced Master who will represent Avon in the Pachabo. A lively Berks v Bucks match (won by 44 teams. During the week, the Multiple

Master In the Western League, Avon has had a Four winners, David Perkins, Phil

Mr D Faria Jersey from a field of 50 pairs. The Mixed

2 Star Master disappointing 7th in the A division. acknowledged the huge contribution of Peter and Gill Pitcher finishing 5th

Master as the highest-placed CI pair.

Mr K Rayford At District level in Jersey, the Open

Casey. The Swiss Pairs held over the played on their normal afternoons over Marion Miles whilst the lower section

Club Master second weekend was won by Mike Davies a week in May. It was won by Simon was won by John and Fiona Honey.

Mr B Wibberley – Mike Elliott. Galvin – Ken Swarbrick from the Garden In Guernsey, the District Individual

Local Master at Wilstead on 15th May the Swiss Teams and was 4th= in the JAN and Ken Keast, Joe

Mrs M P Vint was elected as new Chair- he was second in the Under 28 Trials. won the County Knock-out

man. Richard Chester has We are moving the start time forward final.

Hunts taken over as Vice-chair- from 2.30 to 1.30pm and with the use of A very successful Corn-

man. New committee members elected Bridgemates we will both finish earlier wall Congress was held for

Life Master Master were Gina Dunn (Secretary), Rita Keable and have the results out much sooner. the first time at Falmouth.

Master Winners of the Champions’ Trophy on Cambs and Hunts

Bryden Keenan with a score of 59.60%. won the Spring Foursomes, while Paul Pairs were headed by four Cornish part-

Congratulations to them both on their Fegarty, Catherine Curtis, Jonathan nerships: 1. Chris and Sandra Bickerdike,

Master Mr D Newman with a glass or two of champagne as well and in the Swiss Teams Chris Jagger, Ian 1. Richard Lingham, Ann Slee, Brigid

2 Star Master Smith will be competed for in May each year. Pairs were Peter Bhagat – John Liebe- John and Pauline Deal, David and Lynda