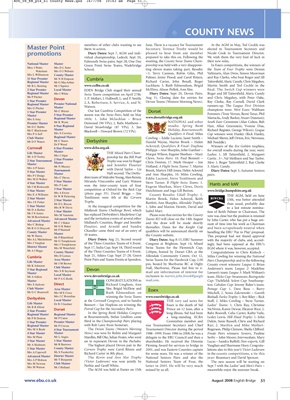 members of other clubs wanting to see June. There is a vacancy for Tournament At the AGM in May, Ted Cockle was

Master Point them in action. Secretary. Terence Treeby would be elected to Tournament Secretary and

pleased to hear from any member

prepared to take this on. Following the

We wish them the very best of luck in

National Master Master pionship was held with a very disappoin- In Essex competitions, the winners of

Our last Cumbria Competition of the champions were: West Essex: Waltham

Master 5 Star Premier season was the Swiss Pairs, held on May

Master Philipps – Ann Sharples, John Gardner – for overall results during the year, were:

3 Star Master competition at Oxford for the Beck Cup

1 Star Master Mrs R W Davis At the inaugural competition for the 1. John and Marion Howitt, David and to a last minute nomina-

1 Star Master tion of Keith Palmer to Chairman. The

Advanced Master and the invitation events of several other Teams KO will close on the 14th August by John Carter, who has put a huge am-

Mr C J Baker Midland’s Counties, Roger and Jennifer and the draw will be made shortly ount of time into his work as Chairman

and been scrupulously neutral when

County Master Chandler came third out of an entry of qualifiers will be announced shortly on handling the EBU ‘Pay to Play’ proposal.

Mr W Harris the County website. This proposal had not found approval

Mrs J Vaughan of the Three Counties Teams of 4 Event. Congress at Brighton. Sept 14, Mixed ingly, had been opposed at the EBU’s

District Master Mrs M Waterfield Sept 17, India Cup. Sept 18, Third round Swiss Teams for the Flemmich Cup, EGM where it was, however, accepted.

Mr A J Biggs County Master of the Three Counties Teams of 4 Event. 2.00pm, hosted by Dorset CBA at the Congratulations to Chris Kinloch –

Area Master Point Pairs and Teams Events at Spondon. Swiss Teams for the Hardwick Cup, 2.00 Pairs Championship and to the following

Derbyshire Local Master at the Cornwall Congress, and to Sandra THE very sad news for Staff, 2. Miles Cowling – Steve Turner.

Mr A Skidmore Mr R Burrows The highest placed Devon pair in the Fleming Award for services to bridge in Vaughan and Sharmane Hoey. Congratu-

Richard Carter in 8th place. for some years. He was a winner of the in the county competitions, a tie this

(Victor Ludorum) was won jointly by National Seniors Team of Four, the The new season will be starting on

Nethie and Geoff White. latter in 2005. He will be very much Sept 7 with the Ladies’ and Men’s Pairs –

The AGM was held at Exeter on 15th missed by us all. meanwhile enjoy the summer break.