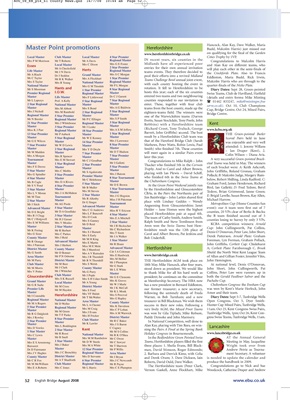 www.herefordshirebridge.co.uk on qualifying for the final of the Garden

Teams Challenge Bowl annual joint event, Malcolm Harris who are through to the

National Master Mr P L Morgan with each county hosting the event in quarter-finals of the Nicko Plate.

Master Mrs M Abbott Mrs S Bond Mrs A G Baldwin teams from the host county, made up the

5 Star Premier one of the Warwickshire teams (Darren

7 Star Premier will meet again in a similar Pairs event

Master 1 Star Regional eted Teams was held in May. The winners

2 Star Premier Thacker who finished 5th in the Corwen

Master Trophy. And to Carol and Albert Brown,

by the Herefordshire and Gloucestershire

2 Star Master CBAs, in the Pairs the Northants pair of

Advanced Master 5 Star Master event): our A team were first out of 7

Master to thank Mike for all his hard work as Collins, Peter Law were runners up in

Gloucestershire Mr G E Clements president; he continues on the committee both the Gerald Faulkner Salver and the

Mrs VF Hulatt following the untimely death of Freda Amor and their team.

2. Barbara and Derrick Kime, with Celia