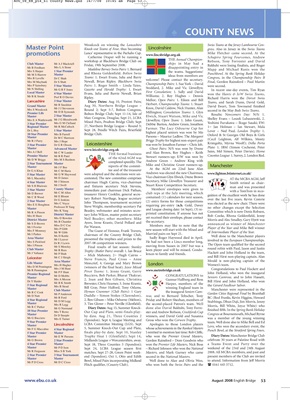 Catherine Draper will be running a

workshop at Blackburn Bridge Club on THE Annual Champion-

Bakhshi were losing finalists, and Roger

Teams: 1. Ewart Evans, Julia and Barry ideas from members are

Mrs B Lavelle Dr C Shah Congress, in the Championship Pairs B

5 Star Master Mr G W Haywood were adopted and the elections were un- Andrews was elected the new Chairman, www.lighton.btinternet.co.uk/

AT the MCBA AGM, Jeff

man and was presented

with a TomTom in reco-

Mr E Blount gnition of the excellent work he has done

Mrs E E Houghton Mrs C Voyce was elected as the new chair. There were

Master no other changes except the Selection

Mr R A Pinson Committee which is now Denis Robson,

the secretary. Morris and Alec Smalley. Gary Hyett was

Miss D C Coe Members may like to note that the

Mr I Fowler Pat Watson. Player of the Year and Mike Bell winner

Mrs P Gibb new season will start with the Mixed and

The Guest of Honour, Frank Travers, of Intermediate Player of the Year.

Mr I Parkes chairman of the County Bridge Club, Married pairs on Sept 21.

Area Master Mr I Leaver presented the trophies and prizes to the Sadly Roger Haywood died in April.

Mrs S Pickford He had not been a Lincs member long, involved in the European Championships.

Final results of last season: Stanley round robin with Paul, Jason and Justin

Club Master Manchester were represented in the

Levy, who won the secondary event, the

Mr R Ferguson Miss S B York 2008. All MCBA members, and past and