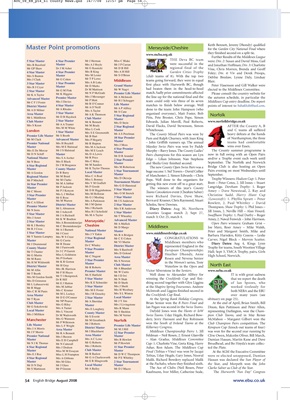 www.mcba.org.uk they finished second on a split tie.

Further Results of the Middlesex League

Mrs A B Luke

3 Star Master 1 Star Premier first place with Hurworth BC, though

Premier Master Mrs J Messenger Mr A McIntosh the line-up for the national final and the the autumn schedule, in particular the

Mr A Rhodes Mr A P Allfrey done to the team: John Hampson (who

Master – John Griffith runners up. The annual teams had comfortable

Mr A Gordon Dr B Barry

getting this new event off to a great start.

The winners of this year’s County Langridge. Dereham Trophy: 1. Roger

Waterlow in the Open and North East

Area Master the Crockfords Cup final. over many years (see

Brian Senior won the B Pairs Final and At the end of April, Brian Smith, Bill