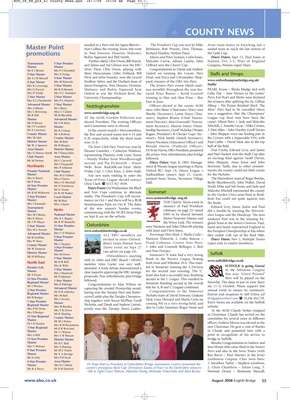 2 Star Master 2 Star Master University Championship. winning in May and Alan Prior – Roy Pairs, but Pearl and Sheila were declared

were: John Slater (Chairman), Mary-Ann Mens’ Pairs had to be cancelled (there

Master Advanced Master AT the AGM, Gordon Fullerton was surer), Stephen Brown (Chief Tourna- League cup final may have been the

Mr W A Sparrow Mr B Hooper Brenda Harris (Publicity Officer). half of the field.

The Inter-Club Pairs Final was won by

Master Mrs M G Gilbert Any new team wishing to enter the Staffordshire (away); Sept 27, Green- for the Pachabo.

Master mence on Oct 1 and there will be a BGB ford, but could not quite squeeze into

THE Charity Teams event in the finals.

commencing with the NCBA Swiss Pairs

Mrs M J Binley National Master £900 to be shared between shire League and the Handicap. The next

www.oxfordshirebridge.co.uk the European Championships at Pau where

ALL EBU members are Percentage Pairs final: 1. Sheila Coda – they ended 12th out of the final 38th.

Mrs M Griew Somerset’s ‘A’ team had a very strong

with its clubs and EBU Board / MDAG www.suffolkbridge.co.uk

Premier Life ted in Somerset winning the A Division SUFFOLK is going Green!

Master for the second year running. The ‘C’ At the Felixstowe Congress

12 Star Premier second in the C League. This resulted in Pairs will be played on the

Regional Master Somerset finishing second in the overall Saturday. The dates to put in your diary

Mr J Wooton title for A, B and C Leagues combined. are 11-12 October. Please support this

Mr D B Adderley Congratulations to the Somerset annual event to ensure its continuity.

Regional Master having won the Tuesday Pairs and Butler-

Mr B Rodger scored Ladder plus the Tuesday Champion-

Master coming 9th in a very strong field, and Entry forms are available on the Suffolk

Mrs T K Down At the AGM Claude Stokes resigned

Mr K Harding as Chairman. Claude has served on the

new Chairman. He gave a vote of thanks