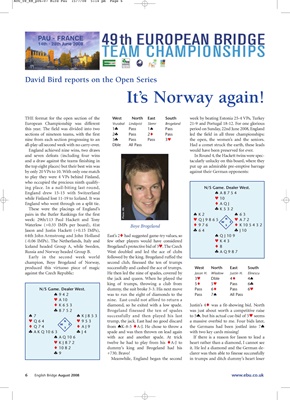 THE format for the open section of the West North East South week by beating Estonia 25-4 VPs, Turkey

sections of nineteen teams, with the first 2♣ Pass 2♦ Pass led the field in all three championships:

nine from each section progressing to an 3♣ Pass Pass 3♥ the open, the women’s and the seniors.

all-play-all second week with no carry-over. Dble All Pass Had a comet struck the earth, these leads

England achieved nine wins, two draws would have been preserved for ever.

and seven defeats (including four wins In Round 4, the Hackett twins were spec-

and a draw against the teams finishing in tacularly unlucky on this board, where they

by only 20 VPs to 10. With only one match against their German opponents:

to play they were 4 VPs behind Finland,

who occupied the precious ninth qualify-

England who went through on a split tie. ♦AQJ

These were the placings of England’s ♣K532

pairs in the Butler Rankings for the first ♠ K2 ♠63

(-0.06 IMPs). The Netherlands, Italy and few other players would have considered ♥K43

Iceland headed Group A, while Sweden, Brogeland’s protective bid of 3♥. The Czech ♦8

Russia and Norway headed Group B. West doubled and led the ace of clubs ♣AQ987

Early in the second week world followed by the king. Brogeland ruffed the

against the Czech Republic: He then led the nine of spades, covered by Jason H. Wladow Justin H. Elinescu

♠ A Q 10 6 with ace and another spade. At trick If there is a reason for Jason to lead a

♥KJ872 twelve he had to play from his ♦A-J to heart rather than a diamond, I cannot see

♣9 +730. Bravo! clarer was then able to finesse successfully