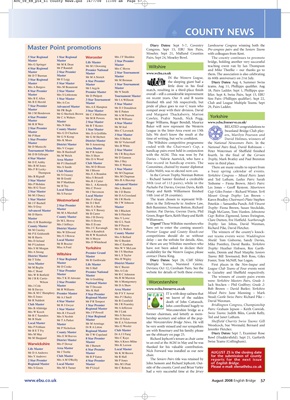 Premier National and Mike Theelke – our thanks go to

Mr E Legg IN the Western League, its 60th anniversary on 21st July.

on recent years. Our A and B teams Sim Pairs (Phillipps qualifier). Sept 22,

The Wiltshire competitive programme the National Newcomers Pairs. In the

Mr D B Gillespie Mr J R Brayshaw with the AGM. This was won by Pat fourth. In the final of the Corwen

Mr P I Hardstaff Club Master fine record in handicap events. The were in third place.

Mrs S Smith Mrs M D Bloore Committee, chaired by master diplomat There are many results to report from

Mrs S J Howse Mr R W Kendrick competitions should do so without out teams events were: Waddington

Life Master First places in the Non-league and

website for details of both these events. to Guiseley and Sheffield respectively.

Worcestershire bridge as a

chair. for the submission of county

had a very successful time at the Jersey