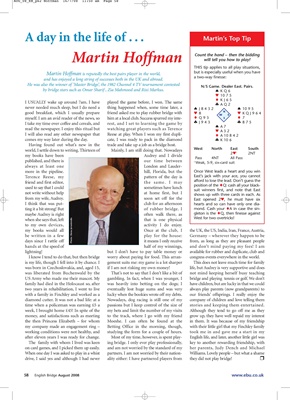 Martin Hoffman Count the hand – then the bidding

will tell you how to play!

THIS tip applies to all play situations,

Martin Hoffman is reputedly the best pairs player in the world, but is especially useful when you have

and has enjoyed a long string of successes both in the UK and abroad.

by bridge stars such as Omar Sharif , Zia Mahmood and Rixi Markus. ♠ KQ6

I USUALLY wake up around 7am. I have played the game before, I won. The same ♣ AQ2

good breakfast, which I usually prepare friend asked me to play rubber bridge with ♥ 8 W E

read the newspaper. I enjoy this ritual but watching great players such as Terence ♥ A32

comes my way later during the day. cate, I was ready to pack in the diamond ♣ K 10 6

Having found out what’s new in the trade and take up a job as a bridge host.

world, I settle down to writing. Thirteen of Mainly, I am still doing that. Nowadays West North East South

my books have been Audrey and I divide

published, and there is our time between 1

always at least one London and Lauder-

more in the pipeline. hill, Florida, but the Once West leads a heart and you win

Terence Reese, my pattern of the day is East’s jack with your ace, you cannot

friend and first editor, the same. I may afford to lose the lead. Don’t guess the

position of the ♦Q: cash all your black-

used to say that I could sometimes have lunch

not write without help at home first, but I shows up with three cards in each. As

from my wife, Audrey. soon set off for the East opened 2♥, he must have six

ting it a bit strong! But of rubber bridge. I mond. Cash your ♦A in case the sin-

maybe Audrey is right often walk there, as gleton is the ♦Q, then finesse against

when she says that, left that is one physical

to my own devices, activity I do enjoy.

my books would all Once at the club, I the UK, the US, India, Iran, France, Austria,

be written in a few play for the house: Germany – wherever they happen to be

days since I rattle off it means I only receive from, as long as they are pleasant people

hands at the speed of half of my winnings, and don’t mind paying my fees! I am

lightning! but I don’t have to pay table money or available for rubber and duplicate, club and

I know I tend to do that, but then bridge worry about paying for food. This arran- congress events everywhere in the world.

is my life, though I fell into it by chance. I gement suits me: my game is a lot sharper This does not leave much time for family

was born in Czechoslovakia, and, aged 15, if I am not risking my own money! life, but Audrey is very supportive and does

US Army who made me their mascot. My gambling. In fact, when I was younger, I bridge and playing tennis or golf. We don’t

family had died in the Holocaust so, after was heavily into betting on the dogs; I have children, but are lucky in that we could

with a family in Finchley and worked as a lucky when the bookies wrote off my debts. our friends’ offsprings. I really enjoy the

diamond cutter. It was not a bad life: at a Nowadays, dog racing is still one of my company of children and love telling them

time when a policeman was earning £5 a passions but I keep control of the size of stories and keeping them entertained.

week, I brought home £45! In spite of the my bets and limit the number of my visits Although they tend to go off me as they

money, and satisfactions such as meeting to the track, where I go with my friend grow up, they have well repaid my interest

the then Princess Elizabeth – for whom Moeshe. I can often be found at the in them. It was because of my friendship

my company made an engagement ring – Betting Office in the morning, though, with their little girl that my Finchley family

working conditions were not healthy, and studying the form for a couple of hours. took me in and gave me a start in my

after eleven years I was ready for change. Most of my time, however, is spent play- English life, and later, another little girl was

The family with whom I lived was keen ing bridge. I only ever play professionally, key to another rewarding friendship, with

on card games, and I picked them up easily. and am not worried by the standard of my her parents, Judy Dench and Michael

When one day I was asked to play in a whist partners. I am not worried by their nation- Williams. Lovely people – but what a shame

drive, I said yes and although I had never ality either: I have partnered players from they did not play bridge!