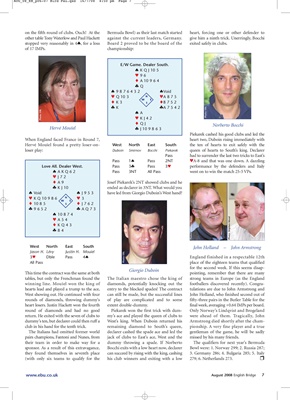 on the fifth round of clubs. Ouch! At the Bermuda Bowl) as their last match started heart, forcing one or other defender to

other table Tony Waterlow and Paul Hackett against the current leaders, Germany. give him a ninth trick. Unerringly, Bocchi

stopped very reasonably in 4♠, for a loss Board 2 proved to be the board of the exited safely in clubs.

Piekarek cashed his good clubs and led the

When England faced France in Round 7, heart two, Duboin rising immediately with

Pass had to surrender the last two tricks to East’s

Love All. Dealer West. Pass 3♣ Pass 3♥ performance by the defenders and Italy

♦A9 Josef Piekarek’s 2NT showed clubs and he

All Pass place of the eighteen teams that qualified

for the second week. If this seems disap-

This time the contract was the same at both pointing, remember that there are many

tables, but only the Frenchman found the The Italian maestro chose the king of strong teams in Europe (as the England

hearts lead and played a trump to the ace, entry to the blocked spades! The contract tulations are due to John Armstrong and

West showing out. He continued with four can still be made, but the successful lines John Holland, who finished second out of

rounds of diamonds, throwing dummy's of play are complicated and to some fifty-three pairs in the Butler Table for the

dummy’s ten, but declarer could then ruff a West’s king. When Duboin returned his Armstrong died shortly after the cham-

club in his hand for the tenth trick. remaining diamond to South’s queen, pionship. A very fine player and a true

The Italians had omitted former world declarer cashed the spade ace and led the gentleman of the game, he will be sadly

pairs champions, Fantoni and Nunes, from jack of clubs to East’s ace, West and the missed by his many friends.

their team in order to make way for a dummy throwing a spade. If Norberto The qualifiers for next year’s Bermuda

sponsor. As a result of this extravagance, Bocchi exits with a low heart now, declarer Bowl were: 1. Norway 299; 2. Russia 287;

they found themselves in seventh place can succeed by rising with the king, cashing 3. Germany 286; 4. Bulgaria 285; 5. Italy

(with only six teams to qualify for the his club winners and exiting with a low 279; 6. Netherlands 273.