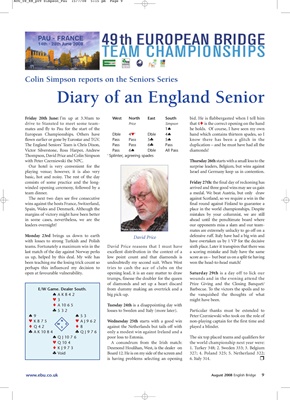 Diary of an England Senior

Friday 20th June: I’m up at 3.30am to West North East South bid. He is flabbergasted when I tell him

mates and fly to Pau for the start of the 1♠ he holds. Of course, I have seen my own

European Championships. Others have Dble 4♥1 Dble 4♠ hand which contains thirteen spades, so I

flown earlier or gone by Eurostar and TGV. Pass Pass 5♣ 5♠ know there has been a glitch in the

The England Seniors’ Team is Chris Dixon, Pass Pass 6♣ Pass duplication – and he must have had all the

with Peter Czerniewski the NPC. Thursday 26th starts with a small loss to the

Our hotel is very convenient for the surprise leaders, Belgium, but wins against

playing venue; however, it is also very Israel and Germany keep us in contention.

basic, hot and noisy. The rest of the day

consists of some practice and the long- Friday 27th: the final day of reckoning has

winded opening ceremony, followed by a arrived and three good wins may see us gain

team dinner. a medal. We beat Austria, but only draw

The next two days see five consecutive against Scotland, so we require a win in the

wins against the hosts France, Switzerland, final round against Finland to guarantee a

Spain, Wales and Denmark. Although the place in the world championships. Despite

margins of victory might have been better mistakes by your columnist, we are still

in some cases, nevertheless, we are the ahead until the penultimate board where

leaders overnight! our opponents miss a slam and our team-

mates are extremely unlucky to go off on a

Monday 23rd brings us down to earth David Price defensive ruff. Italy have had a big win and

teams. Fortunately a maximum win in the David Price reasons that I must have sixth place. Later it transpires that there was

us up, helped by this deal. My wife has low point count and that diamonds is score as us – but beat us on a split tie having

been teaching me the losing trick count so undoubtedly my second suit. When West won the head-to-head match!

open at favourable vulnerability. opening lead, it is an easy matter to draw Saturday 29th is a day off to lick our

trumps, finesse the doubler for the queen wounds and in the evening attend the

E/W Game. Dealer South. from dummy making an overtrick and a Barbecue. To the victors the spoils and to

♠AK842 big pick-up. the vanquished the thoughts of what

♣532 losses to Sweden and Italy (more later). Particular thanks must be extended to

♦ Q42 S ♦8 against the Netherlands but tails off with played a blinder.

♥ Q 10 4 A conundrum from the Irish match: the world championship next year were:

is having problems selecting an opening 6. Italy 314.