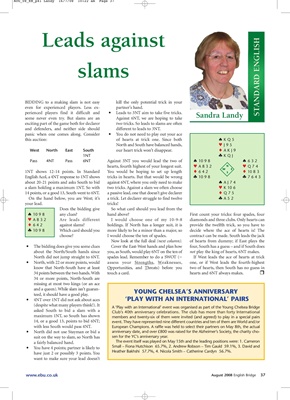 some never even try. But slams are an Against 6NT, we are hoping to take

exciting part of the game both for declarer two tricks. So leads to slams are often

and defenders, and neither side should different to leads to 3NT.

panic when one comes along. Consider • You do not need to play out your ace

this auction: of hearts at trick one. Since both ♠ KQ5

a slam holding a maximum 1NT. So with two tricks. Against a slam we often choose ♥ K 10 6

On the hand below, you are West; it’s a trick. Let declarer struggle to find twelve ♣ A52

♥A832 Are leads different I would choose one of my 10-9-8 diamonds and three clubs. Only hearts can

♦642 against slams? holdings. If North has a longer suit, it is provide the twelfth trick, so you have to

♣ 10 9 8 Which card should you more likely to be a minor than a major, so decide where the ace of hearts is! The

choose? I would choose the ten of spades. contract can be made. South leads the jack

Now look at the full deal (next column). of hearts from dummy; if East plays the

• The bidding does give you some clues Cover the East-West hands and plan how four, South has a guess – and if South does

about the North/South hands since you, as South, would play 6NT on the ten of not play the king of hearts, 6NT makes.

North did not jump straight to 6NT. spades lead. Remember to do a SWOT (= If West leads the ace of hearts at trick

• North, with 22 or more points, would assess your Strengths, Weaknesses, one, or if West leads the fourth-highest

know that North-South have at least Opportunities, and Threats) before you two of hearts, then South has no guess in

34 points between the two hands. With touch a card. hearts and 6NT always makes.

34 or more points, North-South are

missing at most two kings (or an ace

and a queen). While slam isn’t guaran-

teed, it should have a good play.

(despite what many players think!). It A ‘Play with an International’ event was organised as part of the Young Chelsea Bridge

asked South to bid a slam with a Club’s 40th anniversary celebrations. The club has more than forty International

maximum 1NT, so South has shown members and twenty-six of them were invited (and agreed) to play in a special pairs

14, or a good 13, points to bid 6NT; event. They have represented nine different countries and ten of them are World and/or

with less South would pass 4NT. European Champions. A raffle was held to select their partners on May 8th, the actual

• North did not use Stayman or bid a anniversary date, and over £800 was raised for the Alzheimer’s Society, the charity cho-

sen for the YC’s anniversary year.

suit on the way to slam, so North has

a fairly balanced hand. The event itself was played on May 15th and the leading positions were: 1. Cameron

• You have 4 points; partner is likely to

have just 2 or possibly 3 points. You

want to make sure your lead doesn’t