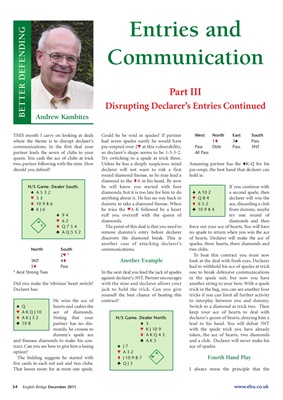 THIS month I carry on looking at deals Could he be void in spades? If partner West North East South

communications. In the first deal your pre-empted over 2™ at this vulnerability, Pass Dble Pass 3NT

partner leads the seven of clubs to your so declarer’s shape seems to be 1-5-5-2. All Pass

queen. You cash the ace of clubs at trick Try switching to a spade at trick three.

two, partner following with the nine. How Unless he has a deeply suspicious mind Assuming partner has the ´K-Q for his

should you defend? declarer will not want to risk a first pre-empt, the best hand that declarer can

round diamond finesse, so he may lead a hold is:

diamond to the tA in his hand. By now

N/S Game. Dealer South. he will know you started with four If you continue with

N ™ 62 diamonds. diamonds and then

t Q754 The point of this deal is that you need to force out your ace of hearts. You will have

discovers the diamond break. This is of hearts. Declarer will make the ace of

2™ 1 To beat this contract you must now

3NT 4t Another Example look at the deal with fresh eyes. Declarer

5t Pass had to withhold his ace of spades at trick

against declarer’s 3NT. Partner encourages in the spade suit, but now you have

Did you make the ‘obvious’ heart switch? with the nine and declarer allows your another string to your bow. With a spade

Declarer has: jack to hold the trick. Can you give trick in the bag, you can see another four

He wins the ace of contract? to interplay between you and dummy.

´ Q hearts and cashes the Switch to a diamond at trick two. Then

™ A K Q J 10ace of diamonds. keep your ace of hearts to deal with

t AKJ32 Noting that your N/S Game. Dealer North. declarer's queen of hearts, denying him a

monds, he crosses to ™ K J 10 9 with the spade trick you have already

and finesses diamonds to make his con- ® AK3 and a club. Declarer will never make his

tract. Can you see how to give him a losing ´ J7 ace of spades.

five cards in each red suit and two clubs. ® QJ5

That leaves room for at most one spade. I always stress the principle that the