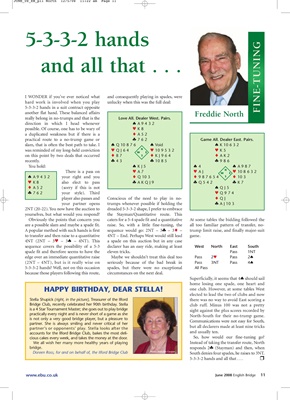 I WONDER if you've ever noticed what and consequently playing in spades, were

hard work is involved when you play unlucky when this was the full deal:

another flat hand. These balanced affairs

really belong in no-trumps and that is the Love All. Dealer West. Pairs.

direction in which I head whenever ♠A9432

possible. Of course, one has to be wary of ♥K8

a duplicated weakness but if there is a ♦A52

practical route to a no-trump game or ♣762 Game All. Dealer East. Pairs.

was reminded of my long-held conviction ♥ QJ64 W E

yourselves, but what would you respond? the Stayman/Quantitative route. This

are a possible slam and maybe a spade fit. raise. So, with a little fine-tuning, the all too familiar pattern of transfer, no-

A popular method with such hands is first sequence would go: 2NT – 3♣ – 3♦ – trump limit raise, and finally major-suit

to transfer and then raise to a quantitative 4NT – End. Perhaps West would still lead game.

sequence covers the possibility of a 5-3 declarer has an easy ride, making at least West North East South

spade fit and therefore seems to have the eleven tricks. Pass 1NT

5-3-3-2 hands? Well, not on this occasion spades, but there were no exceptional All Pass

because those players following this route, circumstances on the next deal.

Superficially, it seems that 4♠ should sail

home losing one spade, one heart and

HAPPY BIRTHDAY, DEAR STELLA! one club. However, at some tables West

elected to lead the two of clubs and now

Stella Shupick (right, in the picture), Treasurer of the Ilford there was no way to avoid East scoring a

Bridge Club, recently celebrated her 90th birthday. Stella club ruff. Minus 100 was not a pretty

is a 4 Star Tournament Master; she goes out to play bridge sight against the plus scores recorded by

practically every night and is never short of a game as she North-South for their no-trump game.

is not only a very good bridge player, but a pleasure to

Communications were not easy for South,

partner. She is always smiling and never critical of her

partner’s or opponents’ play. Stella looks after the but all declarers made at least nine tricks

accounts for the Ilford Bridge Club, bakes the most deli- and usually ten.

cious cakes every week, and takes the money at the door. So, how would our fine-tuning go?

We all wish her many more healthy years of playing Instead of taking the transfer route, North

bridge. responds 2♣ (Stayman) and then, when

Doreen Ross, for and on behalf of, the Ilford Bridge Club Photo: Malcolm Cooper