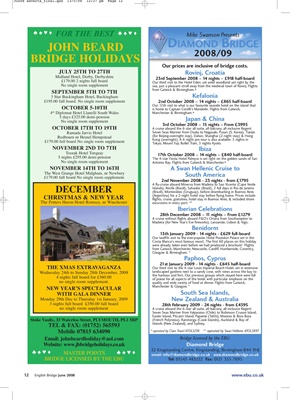 BRIDGE HOLIDAYS Our prices are inclusive of bridge costs.

£179.00 2 nights full board Our third visit to the Hotel Eden, set amid woodland yet right by the

No single room supplement sea, just a pleasant stroll away from the medieval town of Rovinj. Flights

OCTOBER 17TH TO 19TH A cruise aboard the 6-star all-suite, all-balcony, all-inclusive Regent

Kong (overnight). A 6-night pre-tour is also available: 3 nights in

5 nights £295.00 demi-pension The 4-star Fiesta Hotel Palmyra is set right on the golden sands of San

NOVEMBER 14TH TO 16TH A Swan Hellenic Cruise to

Costa Blanca's most famous resort. The first 60 places on this holiday

were already taken even before we had produced a brochure! Flights

THE XMAS EXTRAVAGANZA Our third visit to the 4-star Louis Imperial Beach Hotel, set in extensive

Wednesday 24th to Sunday 28th December, 2008 landscaped gardens next to a sandy cove, with views across the bay to

the harbour and fort. Our previous groups which stayed here were full

4 nights full board for £360.00 of praise for all aspects of the hotel, with particular emphasis on the

no single room supplement. quality and wide variety of food at dinner. Flights from Gatwick,

no single room supplement A cruise aboard the 6-star all-suite, all-balcony, all-inclusive Regent