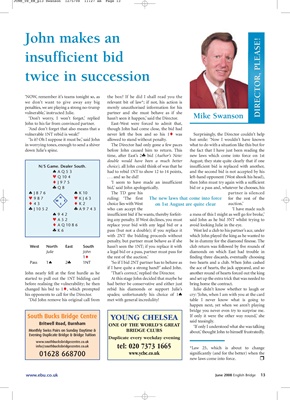 ‘NOW, remember it’s teams tonight so, as the box? If he did I shall read you the

we don’t want to give away any big relevant bit of law*; if not, his action is

penalties, we are playing a strong no-trump merely unauthorised information for his

vulnerable,’ instructed Julie. partner and she must behave as if she

John to his far from convinced partner. East-West were forced to admit that,

‘And don’t forget that also means that a though John had come close, the bid had

vulnerable 1NT rebid is weak!’ never left the box and so his 1♦ was Surprisingly, the Director couldn’t help

‘Is it? Oh I suppose it must be,’ said John allowed to stand without penalty. but smile: ‘Now I wouldn’t have known

in worrying tones, enough to send a shiver The Director had only gone a few paces what to do with a situation like this but for

down Julie’s spine. before John caused him to return. This the fact that I have just been reading the

double would have been a much better August; they state quite clearly that if one

N/S Game. Dealer South. choice), all John could think of was that he insufficient bid is replaced with another,

♣Q8 bid,’ said John apologetically. bid or a pass and, whatever he chooses, his

♥KJ63 ruling: ‘The first The new laws that come into force for the rest of the

♠942 insufficient bid if he wants, thereby forfeit- a mess of this I might as well go for broke,’

♥A52 ing any penalty. If West declines, you must said John as he bid 3NT whilst trying to

♣K6 pass (but not a double); if you replace it West led a club to his partner’s ace, under

penalty, but partner must behave as if she be in dummy for the diamond finesse. The

West North East South hasn’t seen the 1NT; if you replace it with club return was followed by five rounds of

Julie John a legal bid or a pass, partner must pass for diamonds on which East had trouble in

1♦ the rest of the auction.’ finding three discards, eventually choosing

if I have quite a strong hand?’ asked John. the ace of hearts, the jack appeared, and so

John nearly fell at the first hurdle as he ‘That’s correct,’ replied the Director. another round of hearts forced out the king

before realising the vulnerability; he then had better be conservative and either just bring home the contract.

changed his bid to 1♦, which prompted rebid his diamonds or support Julie’s Julie didn’t know whether to laugh or

his opponents to call for the Director. spades; unfortunately his choice of 1♠ cry: ‘John, when I am with you at the card

‘Did John remove his original call from met with general incredulity! table I never know what is going to

happen next, yet when we aren’t playing

bridge you never even try to surprise me.

South Bucks Bridge Centre YOUNG CHELSEA If only it were the other way round,’ she

Britwell Road, Burnham ONE OF THE WORLD’S GREAT ‘If only I understood what she was talking