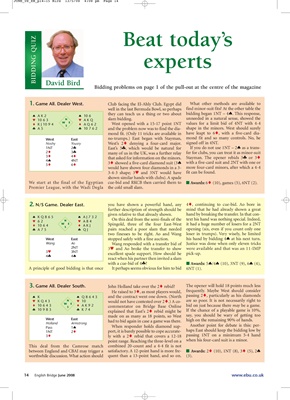 1. Game All. Dealer West. Club facing the El-Ahly Club. Egypt did What other methods are available to

well in the last Bermuda Bowl, so perhaps find minor-suit fits? At the other table the

mond fit. (Only 11 tricks are available in have leapt to 6♦, with a five-card dia-

West East no-trumps.) East began with Stayman, mond fit and so many controls. No, he

2♦ 3♣ many of us in the UK, was a further relay fer for clubs, you can treat it as minor-suit

that asked for information on the minors.

would have shown four diamonds in a 3- more four-card minors, after which a 4-4

Premier League, with the Wadi Degla the cold small slam.

2. N/S Game. Dealer East. you have shown a powerful hand, any 4♦, continuing to cue-bid. Ao bore in

given relative to that already shown. hand by breaking the transfer. In that con-

♥ 62 N ♥ A84 On this deal from the semi-finals of the text his hand was nothing special. Indeed,

♦ AKJ Spingold, three of the four East-West it had a huge number of losers for a 2NT

♣ A75 ♣ QJ pairs reached a poor slam that needed opening (six, even if you count only one

two finesses to be right. Ao and Wang loser in trumps). Very wisely, he limited

West East stopped safely with a fine auction. his hand by bidding 4♠ at his next turn.

excellent spade support. How should he pick-up.

react when his partner then invited a slam

A principle of good bidding is that once It perhaps seems obvious for him to bid 6NT (1).

3. Game All. Dealer South. John Holland take over the 2♦ rebid? The opener will hold 18 points much less

He raised to 3♦, as most players would, frequently. Maybe West should consider

♠ K ♠ Q8643 and the contract went one down. (North passing 2♦, particularly as his diamonds

♦ AK92 commentator on Bridge Base Online bid on just because there may be a game.

made on as many as 18 points, so West say, you should be wary of getting too

West East high on the remaining 90% of hands.

had to bid again in case a game was there.

Pass 1♠ When responder holds diamond sup- Another point for debate is this: per-

1NT 2♦ port, it is barely possible to cope accurate- haps East should keep the bidding low by

point range. Reaching the three-level on a when his four-card suit is a minor.

worthwhile discussion. What action should quent than a 13-point hand, and so on. (3).