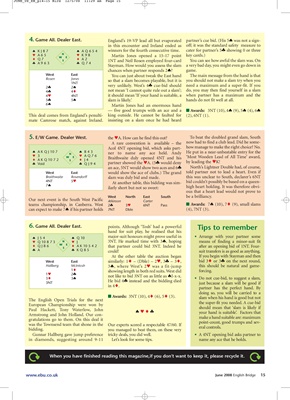 in this encounter and Ireland ended as off; it was the standard safety measure to

♦ Q7 S ♦ A2 1NT and Neil Rosen employed four-card You can see how awful the slam was. On

Stayman. How would you assess the slam a very bad day, you might even go down in

so that a slam becomes playable, but it is you should not make a slam try when you

4♥ 4NT it should mean ‘If your hand is suitable, a when partner has a maximum and the

6♠ Martin Jones had an enormous hand

This deal comes from England’s penulti- king outside. He cannot be faulted for (2), 6NT (1).

mate Camrose match, against Ireland. insisting on a slam once he had heard

5. E/W Game. Dealer West. the ♥A. How can he find this out? To beat the doubled grand slam, South

A rare convention is available – the now had to find a club lead. Did he some-

Acol 4NT opening bid, which asks part- how manage to make the right choice? No.

♠ 843 ner to name any ace held. Andy He put in a near-unbeatable entry for the

an ace, 5NT would show two aces and 6♣ North’s Lightner Double had, of course,

West East would show the ace of clubs.) The grand told partner not to lead a heart. Even if

Braithwaite Rosendorff slam was duly bid and made. this was unclear to South, declarer’s 6NT

4NT 5♥ bid couldn’t possibly be based on a queen-

At another table, this bidding was sim-

ilarly short but not so sweet:

ous that a heart lead would not prove to

Our next event is the South West Pacific Atkinson Carter

6. Game All. Dealer East. points. Although ‘Tosh’ had a powerful Tips to remember

hand for suit play, he realised that his

Hallberg McIntosh 3 ♠ , where West’s 2 ♥ was a fit-jump this should be natural and game-

1♦ showing length in both red suits. West did forcing.

He bid 4♣ instead and the bidding died • Do not cue-bid, to suggest a slam,

just because a slam will be good if

in 4♦. partner has the perfect hand. By

doing so, you will be carried to a

The English Open Trials for the next

European Championship were won by the super-fit you needed. A cue-bid

Paul Hackett, Tony Waterlow, John should mean that ‘slam is likely if

♠♥♦♣ your hand is suitable’. Factors that

Armstrong and John Holland. Our con-

gratulations go to them. On this deal it make a hand suitable are: maximum

was the Townsend team that shone in the point-count, good trumps and sev-

Our experts scored a respectable 47/60. If

you managed to beat them, on these very

in diamonds, suggesting around 9-11 Let’s look for some tips. name any ace that he holds.