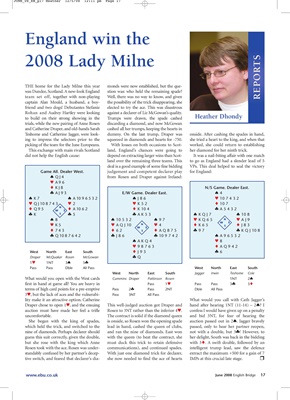 THE home for the Lady Milne this year monds were now established, but the que-

was Dundee, Scotland. A new-look England stion was: who held the remaining spade?

team set off, together with non-playing Well, there was no way to know, and given

captain Alan Mould, a husband, a boy- the possibility of the trick disappearing, she

friend and two dogs! Debutantes Stefanie elected to try the ace. This was disastrous

Rohan and Audrey Hartley were looking against a declarer of Liz McGowan’s quality.

to build on their strong showing in the Trumps were drawn, the spade cashed Heather Dhondy

trials, while the new pairing of Anne Rosen discarding a diamond, and now McGowan

and Catherine Draper, and old-hands Sarah cashed all her trumps, keeping the hearts in

Teshome and Catherine Jagger, were look- dummy. On the last trump, Draper was onside. After cashing the spades in hand,

ing to impress the selectors prior to the squeezed in diamonds and hearts for -750. she tried a heart to the king, and when that

picking of the team for the June Europeans. With losses on both occasions to Scot- worked, she could return to establishing

This exchange with main rivals Scotland land, England’s chances were going to her diamond for her ninth trick.

did not help the English cause: depend on extracting larger wins than Scot- It was a nail-biting affair with one match

land over the remaining three teams. This to go as England had a slender lead of 5

deal is a good example of some fine bidding VPs. This deal helped to seal the victory

♠ QJ4 from Rosen and Draper against Ireland:

3♥, but the lack of aces and the vulnerabi- Pass 3NT All Pass

lity make it an attractive option. Catherine What would you call with Cath Jagger’s

auction must have made her feel a trifle Rosen to 3NT rather than the inferior 4♥. confess I would have given up on a penalty

uncomfortable. The contract is solid if the diamond queen and bid 3NT, for fear of hearing the

She began with the king of spades, is onside, so Rosen won the opening spade auction passed out in 2♠. Jagger bravely

which held the trick, and switched to the lead in hand, cashed the queen of clubs, passed, only to hear her partner reopen,

guess this suit correctly, given the double, with the queen (to beat the contract, she her delight, South was back in the bidding

but she rose with the king which Anne must duck this trick to retain defensive with 3♦. A swift double, followed by an

Rosen took with the ace. Rosen was under- communications), and continued spades. intelligent trump lead, saw the defence

standably confused by her partner’s decep- With just one diamond trick for declarer, extract the maximum +500 for a gain of 7

tive switch, and feared that declarer’s dia- she now needed to find the ace of hearts IMPs at this crucial late stage.