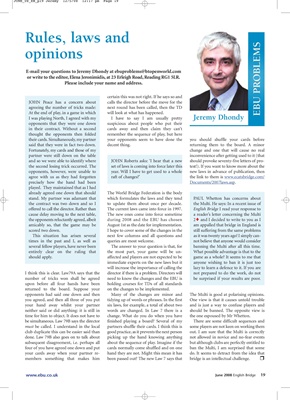 certain this was not right. If he says so and

agreeing the number of tricks made: next round has been called, then the TD

At the end of play, in a game in which will look at what has happened.

I was playing North, I agreed with my I have to say I am usually pretty Jeremy Dhondy

in their contract. Without a second cards away and then claim they can’t

thought the opponents then folded remember the sequence of play, but here

their cards. Simultaneously, my partner your opponents seem to have done the you should shuffle your cards before

said that they were in fact two down. decent thing. returning them to the board. A minor

Fortunately, my cards and those of my change and one that will cause no real

and so we were able to identify where JOHN Roberts asks: ‘I hear that a new should provoke seventy-five letters of pro-

the second losing trick occurred. The set of laws is coming into force later this test!). If you want to know more about the

opponents, however, were unable to year. Will I have to get used to a whole new laws in advance of publication, then

agree with us as they had forgotten raft of changes?’ the link to them is www.ecatsbridge.com/

precisely how the hand had been Documents/2007laws.asp.

played. They maintained that as I had

stand. My partner was adamant that which formulates the laws and they tend PAUL Whetton has concerns about

the contract was two down and so I to update them about once per decade. the Multi. He says: In a recent issue of

offered to call the director. Rather than The current laws came into force in 1997. English Bridge I read your response to

cause delay moving to the next table, The new ones come into force sometime a reader’s letter concerning the Multi

the opponents reluctantly agreed, albeit during 2008 and the EBU has chosen 2♦ and I decided to write to you as I

amicably so, that the game may be August 1st as the date for implementation. am appalled that bridge in England is

scored two down. I hope to cover some of the changes in the still suffering from the same problems

This situation has arisen several next few columns and all questions and as it was twenty years ago! I simply can-

times in the past and I, as well as queries are most welcome. not believe that anyone would consider

several fellow players, have never been The answer to your question is that, for banning the Multi after all this time.

entirely clear on the ruling that the most part, your game will be un- What possible advantage is that to the

should apply. affected and players are not expected to be game as a whole? It seems to me that

will increase the importance of calling the lazy to learn a defence to it. If you are

I think this is clear. Law79A says that the director if there is a problem. Directors will not prepared to do the work, do not

number of tricks won shall be agreed need to know the changes and the EBU is be surprised if your results are poor.

returned to the board. Suppose your on the changes to be implemented.

opponents had said one down and then Many of the changes are minor and The Multi is good at polarising opinions.

you agreed, and then all three of you put tidying up of words or phrases. In the first One view is that it causes untold trouble

your hand away whilst your partner six laws, for example, a total of about two and is just a way to confuse players and

neither said or did anything: it is still in words are changed. In Law 7 there is a should be banned. The opposite view is

time for him to object. It does not have to change. What do you do when you have the one espoused by Mr Whetton.

be simultaneous. Law 79B says the director finished playing a board? Several of my There are some difficult sequences and

must be called. I understand in the local partners shuffle their cards. I think this is some players are not keen on working them

club duplicate this can be easier said than good practice, as it prevents the next person out. I am sure that the Multi is correctly

done. Law 79B also goes on to talk about picking up the hand knowing anything not allowed in novice and no-fear events

subsequent disagreement, i.e. perhaps all about the sequence of play. Imagine if the but although clubs are perfectly entitled to

four of you have agreed one down and put cards normally come shuffled and on one ban the Multi, I am surprised that some

your cards away when your partner re- hand they are not. Might this mean it has do. It seems to detract from the idea that

members something that makes him been passed out? The new Law 7 says that bridge is an intellectual challenge.