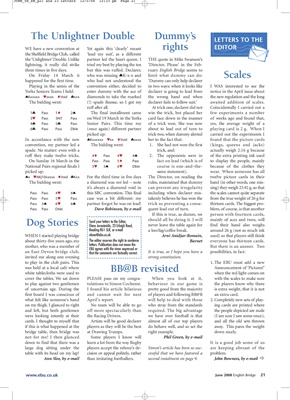 The Unlightner Double Dummy’s LETTERS TO THE

the Sheffield Bridge Club, called ‘lead my suit’, as a different

the ‘Unlightner’ Double. Unlike partner led the heart queen. I THE quote in Mike Swanson’s

lightning, it really did strike tried my best by playing the ten ‘Director, Please’ in the Feb-

three times in five days. but this was ruffed. Declarer, ruary English Bridge seems to

On Friday 14 March it

happened for the first time.

who was missing ♠K-x-x and

who had not understood the

limit what dummy can do:

‘Dummy can only help declarer

Playing in the semis of the convention either, decided to in two ways: when it looks like I WAS interested to see the

Yorks Seniors Teams I held: enter dummy with the ace of declarer is going to lead from notice in the April issue about

The bidding went: (!) spade finesse, so I got my declarer fails to follow suit.’ awaited addition of scales.

ruff after all. At trick one, declarer did not Coincidentally I carried out a

1♣ Pass 1♦ 2♠ The final installment came win the trick, but placed her few experiments a number

3♥ Pass 3NT Pass on Wed 19 March in the Yorks card face down in the manner of weeks ago and found that,

4♣ Pass 5♣ Pass Senior Pairs. This time my of a trick won. She was now yes, the average weight of a

6♣ Pass Pass Dble (once again) different partner about to lead out of turn to playing card is 2 g. When I

picked up: trick two, when dummy alerted carried out the experiments I

In accordance with the new ♠Kxxxxxx ♥xx ♦Void ♣xxxx her to the fact that: found that the picture cards

convention, my partner led a The bidding went: 1. She had not won the first (kings, queens and jacks)

spade. No matter: even with a trick, and: actually weigh 2.16 g because

ruff they make twelve tricks. 4♦ Pass 4♥ 4♠ 2. The opponents were in of the extra printing ink used

On Sunday 16 March in the Pass Pass 5♦ Pass fact on lead (which is of to display the people, mainly

picked up: same statement). wear. When someone has all

♠x ♥AKJ10xxxxx ♦Void ♣Kxx For the third time in five days The Director, on reading the twelve picture cards in their

The bidding went: a diamond was not led – note rules, maintained that dummy hand (in other words, one mis-

it’s always a diamond void in can prevent any irregularity sing) they weigh 25.92 g, so that

Pass Pass 4♥ 4♠ this SBC convention. This final including when declarer mis- the scales cannot quite separate

Pass Pass 5♥ Pass case was a bit different: my takenly believes he has won the from the true weight of 26 g for

Pass 5♠ 6♥ 6♠ partner forgot he was on lead! trick so preventing a conse- thirteen cards. The biggest pro-

Pass Pass Dble Dave Robinson, by e-mail quent lead out of turn. blem, of course, is that another

If this is true, as dumm, we person with fourteen cards,

should all be doing it. I will mainly of aces and twos, will

Dog Stories Send your letters to the Editor,

about thirty-five years ago, my The editor reserves the right to condense Barnet everyone has thirteen cards.

mother, who was a member of letters. Publication does not mean the But there is an answer. Two

EBU agrees with the views expressed or

an East Devon bridge club, that the comments are factually correct. It is true, so I hope you have a possibilities, in fact:

invited me along one evening strong constitution.

to play in the club pairs. This 1. The EBU must add a new

was held at a local café where

white tablecloths were used to

when the red light comes on

cover the tables. We sat down PLEASE pass on my congra- When you look at it, with the scales to make sure

to play against two gentlemen tulations to Simon Cochemé. behaviour in our game is the players know why there

of uncertain age. During the I found his article hilarious pretty good from the majority is extra weight, that it is not

first board I was conscious of and cannot wait for next of players and following BB@B an extra card.

what felt like someone's hand April’s report. will help to deal with those 2. Completely new sets of play-

on my thigh. I glanced to right No team will be able to go who stray from the standards ing cards are printed where

and left, but both gentlemen off more spectacularly than required. The big advantage the people depicted are nude

were looking intently at their the Racing Drivers. we have over football is that (I am sure I saw some once),

cards. I thought to myself that Artists will be good declarer almost all of our top players and all the old sets thrown

if this is what happened at the players as they will be the best do behave well, and so set the away. This pares the weight

bridge table, then bridge was at Drawing Trumps. right example. down nicely.

not for me! I then glanced Some players I know will Phil Green, by e-mail

table with its head on my lap! cision or appeal politely, rather cessful that we have featured a problem.