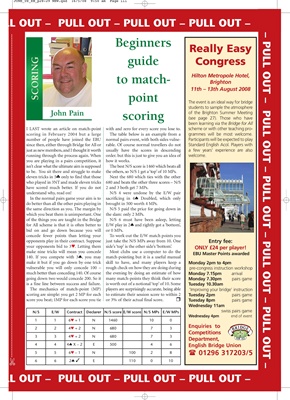 point The event is an ideal way for bridge

students to sample the atmosphere

scoring of the Brighton Summer Meeting

been learning via the Bridge for All

I LAST wrote an article on match-point with and zero for every score you lose to. scheme or with other teaching pro-

scoring in February 2004 but a large The table below is an example from a grammes will be most welcome.

number of people have joined the EBU normal pairs event, with both sides vulne- Participants will be expected to play

since then, either through Bridge for All or rable. Of course normal travellers do not Standard English Acol. Players with

just as new members, and I thought it worth usually have the scores in descending a few years’ experience are also

running through the process again. When order. but this is just to give you an idea of welcome.

you are playing in a pairs competition, it how it works.

understand why, read on! N/S 4 were undone by the E/W pair

In the normal pairs game your aim is to sacrificing in 4♠ Doubled, which only

do better than all the other pairs playing in brought in 500 worth 4 MPs.

the same direction as you. The margin by N/S 5 paid the price for going down in

which you beat them is unimportant. One the slam: only 2 MPs.

of the things you are taught in the Bridge N/S 6 must have been asleep, letting

for All scheme is that it is often better to E/W play in 2♠ and rightly got a ‘bottom’,

bid on and go down because you will or 0 MPs.

opponents play in their contract. Suppose just take the N/S MPs away from 10. One Entry fee:

140. If you compete with 3♠, you may match-pointing but it is a useful manual

make it but if you go down by one trick skill to have, and many players keep a Monday 2pm to 4pm

much better than conceding 140. Of course the evening by doing an estimate of how Monday 7.15pm arrival

going down two would concede 200. So it many match-points they think their score Monday 7.30pm pairs game

is a fine line between success and failure. is worth out of a notional ‘top’ of 10. Some Tuesday 10.30am

The mechanics of match-point (MP) players are surprisingly accurate, being able ‘Improving your bridge’ instruction

scoring are simple: you get 2 MP for each to estimate their session score to within 2 Tuesday 2pm pairs game

score you beat; 1MP for each score you tie or 3% of their actual final score. Tuesday 8pm pairs game