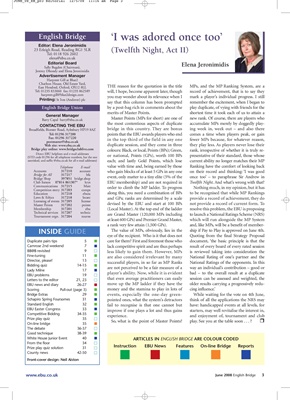 English Bridge ‘I was adored once too’

East Hendred, Oxford, OX12 8LL THE reason for the quotation in the title MPs, and the MP Ranking System, are a

you may wonder about its relevance when I mark a player’s individual progress. I still

say that this column has been prompted remember the excitement, when I began to

English Bridge Union by a post-bag rich in comments about the play duplicate, of vying with friends for the

merits of Master Points. shortest time it took each of us to attain a

Barry Capal barry@ebu.co.uk Master Points (MPs for short) are one of new rank. Of course, there are players who

Broadfields, Bicester Road, Aylesbury HP19 8AZ bridge in this country. They are bonus ing week in, week out – and also there

in the top third of the field in any one fewer MPs because, for whatever reason,

Web site: www.ebu.co.uk duplicate session, and they come in three they play less. As players never lose their

Bridge play online: www.bridgeclublive.com colours: Black, or local, Points (BPs); Green, rank, irrespective of whether it is truly re-

(STD code 01296 for all telephone numbers, bar the one or national, Points (GPs), worth 100 BPs presentative of their standard, those whose

asterisked, and suffix @ebu.co.uk for all e-mail addresses) each; and lastly Gold Points, which lose current ability no longer matches their MP

Telephone E-mail value with time and, being earned by those Ranking have the comfort of looking back

Accounts 317210 account who gain blocks of at least 5 GPs in any one on their record and thinking: ‘I was good

Bridge Shop 397851 bridge.shop event, only matter to a tiny elite (5% of the once too’ – to paraphrase Sir Andrew in

Club liaison 07814 861307* krys EBU membership) and are not required in Twelfth Night. And what’s wrong with that?

Communications 317215 Matt order to climb the MP ladder. To progress Nothing much, in my opinion, but it has

Education 317218 ebuta along this, you need a combination of BPs to be recognised that while MP Rankings

Laws & Ethics 317218 lecsec and GPs; ranks are determined by a scale provide a record of achievement, they do

Master Points 317202 points devised by the EBU and start at 100 BPs not provide a record of current form. To

Membership 317201 ebu (Local Master). At the top end of the ladder resolve this problem, the EBU is proposing

are Grand Master (120,000 MPs including to launch a National Ratings Scheme (NRS)

at least 600 GPs) and Premier Grand Master, which will run alongside the MP System

INSIDE GUIDE The value of MPs, obviously, lies in the

eye of the recipient. Who is it that does not

ship if Pay to Play is approved on June 4th.

Quoting from the final Strategy Proposal

Duplicate pairs tips 5 care for them? First and foremost those who document, ‘the basic principle is that the

BB@B revisited 9 less likely to gain them. However, MPs is reviewed taking into consideration the

successful players, in so far as MP Ranks National Ratings of the opponents. In this

EBU problems 19 player’s ability. Now, while it is evident bad – to the overall result at a duplicate

Letters to the editor 21, 23 that even average practitioners can easily session can be assessed and weighted, the

Scoring Pull-out (page 3) money and the stamina to play in lots of cing influence.’

Bridge Extras 29 events, especially the one-day green- While waiting for the vote on 4th June,

Schapiro Spring Foursomes 31 pointed ones, what the system’s detractors think of all the applications the NRS may

Standard English 32 fail to recognise is that one cannot but have: handicapped events at all levels, for

EBU Easter Congress 33 improve if one plays a lot and thus gains starters, may well revitalise the interest in,

experience. and enjoyment of, tournament and club