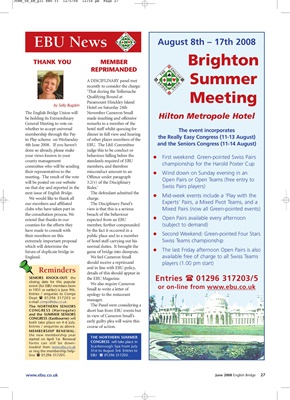 recently to consider the charge:

‘That during the Tollemache

be holding its Extraordinary made insulting and offensive Hilton Metropole Hotel

General Meeting to vote on remarks to a member of the

membership through the Pay dinner in full view and hearing

done so already, please make judge this to be conduct or

your views known to your behaviour falling below the

committee who will be sending members, and therefore championship for the Harold Poster Cup

their representatives to the misconduct amount to an

meeting. The result of the vote Offence under paragraph

• Wind down on Sunday evening in an

will be posted on our website 3.2(v) of the Disciplinary

on that day and reported in the Rules.’ Swiss Pairs players)

next issue of English Bridge. The defendant admitted the

We would like to thank all charge. • Mid-week events include a ‘Play with the

our members and affiliated The Disciplinary Panel’s Experts’ Pairs, a Mixed Pivot Teams, and a

the consultation process. We breach of the behaviour

counties for the efforts they member, further compounded (subject to demand)

their members on this public place and to a member • Second Weekend: Green-pointed Four Stars

which will determine the normal duties. It brought the

future of duplicate bridge in game of bridge into disrepute. • The last Friday afternoon Open Pairs is also

England. We feel Cameron Small available free of charge to all Swiss Teams

Reminders details of this should appear in

closing date for this popular

Entries / enquiries to Comps apology to the restaurant

The NORTHERN SENIORS The Panel were considering a

and the SUMMER SENIORS in view of Cameron Small’s

both take place on 4-6 July. early guilty plea will waive this

Entries / enquiries as above. course of action.

forms can still be down- CONGRESS will take place in

or ring the membership help- 31st to August 3rd. Entries to