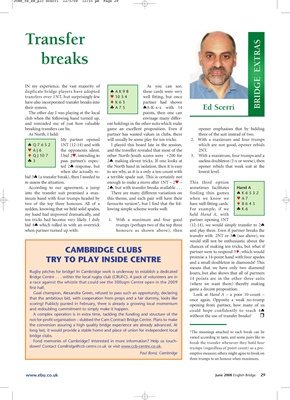 IN my experience, the vast majority of As you can see,

duplicate bridge players have adopted ♠ AK98 these cards were very

transfers over 1NT, but surprisingly few ♥ 10 5 4 well fitting, but once

have also incorporated transfer breaks into ♦ K63 partner had shown

The other day I was playing at the local points, then one can

club when the following hand turned up, envisage many differ-

breaking transfers can be. game an excellent proposition. Even if opener emphasises that by bidding

As North, I held: partner has wasted values in clubs, there three of the suit instead of two.

My partner opened will usually be some play for ten tricks. 2. With a maximum and four trumps

♥AJ6 the opponents silent, and the traveller revealed that most of the 2NT.

♣3 pass partner’s expec- 2♠ making eleven tricks. If one looks at useless doubleton (J-x or worse), then

ted 2♠ response, but the North hand in isolation, then it is easy opener rebids that weak suit at the

when she actually re- to see why, as it is a only a ten-count with lowest level.

bid 3♠ (a transfer break), then I needed to a terrible spade suit. This is certainly not

re-assess the situation. enough to make a move after 1NT – 2♥ – This third option

According to our agreement, a jump 2♠, but with transfer breaks available . . . sometimes facilitates Hand A

imum hand with four trumps headed by this theme, and each pair will have their when we know we ♥A7

two of the top three honours. All of a favourite version*, but I find that the fol- have well-fitting cards. ♦8643

my hand had improved dramatically, and held Hand A, with

bid 4♠ which rolled in with an overtrick trumps (perhaps two of the top three (12-14), we would simply transfer to 2♠

when partner turned up with: honours as shown above), then and play there. Even if partner breaks the

would still not be enthusiastic about the

chances of making ten tricks, but what if

CAMBRIDGE CLUBS partner were to respond 3♦, which would

TRY TO PLAY INSIDE CENTRE and a small doubleton in diamonds? This

means that we have only two diamond

Rugby pitches for bridge! In Cambridge work is underway to establish a dedicated losers, but also shows that all of partners

Bridge Centre . . . within the local rugby club (CRUFC). A pack of volunteers are in 14 points are in the other three suits

first half. game a decent proposition.

Goal champion, Alexandra Green, refused to pass such an opportunity, declaring Look at Hand A – a poor 10-count –

that the ambitious bid, with cooperation from props and a fair dummy, looks like once again. Opposite a weak no-trump

scoring! Publicly punted in February, there is already a growing local momentum opening from partner, how many of us

and redoubling commitment to simply make it happen. could hope confidently to reach 4 ♠

A complex operation is in extra time, tackling the funding and structure of the without the use of transfer breaks?

the conversion assuring a high quality bridge experience are already advanced. At

long last, it would provide a stable home and place of union for independent local *The meanings attached to each break can be

bridge clubs. varied according to taste, and some pairs like to

Fond memories of Cambridge? Interested in more information? Help us touch- break the transfer whenever they hold four

Paul Bond, Cambridge emptive measure; others might agree to break on

three trumps to an honour when maximum.