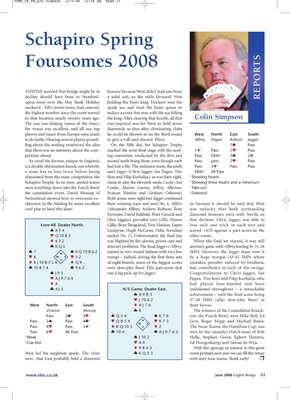 decline should have been in Stratford- a solid suit, so the odds favoured West

upon-Avon over the May Bank Holiday holding the heart king. Declarer won the

weekend. Fifty-seven teams had entered, spade ace and tried the heart queen to

the highest number since the event moved induce a cover, but rose with the ace felling

to that location nearly twenty years ago. the king. After clearing that hurdle, all that Colin Simpson

The sun was shining (some of the time), was required was for West to hold seven

the venue was excellent, and all our top diamonds so that after eliminating clubs

to do battle. Hearing several players grumb- to give a ruff-and-discard. Phew. Allfrey Pagan Robson Jagger

ling about the seeding reinforced the idea On the fifth day, the Schapiro Trophy 1♣ Pass

petition ahead. ing committee vindicated by the first and Pass Dble3 2♣ 2♦

As usual the format, unique in England, second seeds being there, even though each Pass pass 2♥4 Pass

is a double elimination knock-out whereby had lost a life. The unbeaten team, the tenth Pass 3♦ 4 Pass Pass

a team has to lose twice before being seed Jagger (Chris Jagger, Ian Pagan, Tim Dble4 All Pass

eliminated from the main competition, the Rees and Filip Kurbalija), as was their right, 1

Showing three hearts and a minimum

were tumbling down into the Punch Bowl, Cooke, Martin Garvey, Jeffrey Allerton, 3

uberance in the bidding by some excellent their winning ways and seed No. 1, Allfrey In fairness it should be said that West

card play to land this slam: (Alexander Allfrey, Andrew Robson, Tony was unlucky that both outstanding

Forrester, David Bakhshi, Peter Crouch and diamond honours were with North, so

Glyn Liggins) prevailed over Gillis (Simon that declarer, Chris Jagger, was able to

Love All. Dealer North. Gillis, Boye Brogeland, Tom Hanlon, Espen lose only one trick in each suit and

♠ A54 Lindqvist, Hugh McGann, Odin Svendsen scored +670 against a part-score in the

♦ 632 was blighted by fire alarms, power cuts and When the final set started, it was still

♠ J93 was a big pick-up for Jagger: Congratulations to Chris Jagger, Ian

♦A had played four-handed and been

. ♠A983 achievement – with the final score being

Zivkovic Mossop ♣8 The winners of the Consolation Knock-

♦9843 With the upsurge in interest in this great

West led his singleton spade. The clues ♣KQ53 event perhaps next year we can fill the venue

were that East probably held a diamond with sixty-four teams. Book early!