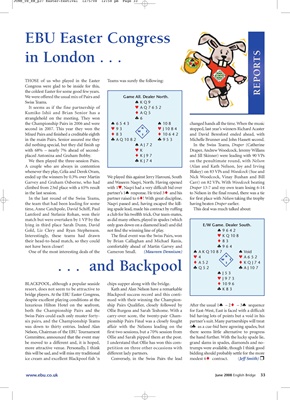 THOSE of us who played in the Easter Teams was surely the following:

Congress were glad to be inside for this,

the coldest Easter for some good few years.

We were offered the usual mix of Pairs and Game All. Dealer North.

It seems as if the fine partnership of ♥AQ7652

Kumiko Ishii and Brian Senior has a ♦AQ5

stranglehold on the meeting. They won ♣6

Mixed Pairs and finished a creditable eighth ♦ 83 S ♦ 10 6 4 2 and David Beresford ended ahead, with

did nothing special, but they did finish up ♠AJ72 In the Swiss Teams, Draper (Catherine

placed Antonina and Graham Bobby. ♦KJ97 and Jill Skinner) were leading with 90 VPs

We then played the three-session Pairs. ♣KJ74 on the penultimate round, with Nelson

A couple who are always in contention (Alan and Kath Nelson, Joy and Irving

whenever they play, Celia and Derek Oram, Blakey) on 83 VPs and Woodcock (Sue and

ended up the winners by 0.3% over Martin We played this against Jerry Harouni, South Nick Woodcock, Vinay Bushan and Bill

Garvey and Graham Osborne, who had and Waseem Naqvi, North. Having opened Carr) on 82 VPs. With Woodcock beating

in the last session. partner’s 1♠ response. He tried 3♦ and his to Nelson in the final round, there was a tie

In the last round of the Swiss Teams, partner raised to 6♦! With great discipline, for first place with Nelson taking the trophy

the team that had been leading for some Naqvi passed and, having escaped the kill- having beaten Draper earlier.

time, Anne Catchpole, David Schiff, Paul ing spade lead, made his contract by ruffing This deal was much talked about:

Lamford and Stefanie Rohan, won their a club for his twelfth trick. Our team-mates,

match but were overtaken by 1 VP by the as did many others, played in spades (which

lying in third place Sarah Dunn, David only goes down on a diamond lead) and did E/W Game. Dealer South.

Gold, Liz Clery and Ryan Stephenson. not find the winning line of play. ♠9642

Interestingly, these teams had drawn The final event was the Swiss Pairs, won ♥ K Q 10 8

their head-to-head match, so they could by Brian Callaghan and Michael Ranis, ♦83

not have been closer! comfortably ahead of Martin Garvey and ♣964

BLACKPOOL, although a popular seaside chips supper along with the bridge. ♦ 10 9 6

resort, does not seem to be attractive to Kath and Alan Nelson have a remarkable ♣K83

bridge players. At the EBU Easter Congress, Blackpool success record and this conti-

luxurious Hilton Hotel on the seafront, ship Pairs Qualifier, closely followed by After the usual 1♠ – 2♦ – 3♠ sequence

both the Championship Pairs and the Ollie Burgess and Sarah Teshome. With a for East-West, East is faced with a difficult

Swiss Pairs could each only muster forty- carry-over score, the twenty-pair Cham- bid having lots of points but a void in his

six pairs, and the Championship Teams pionship Pairs Final was a closely fought partner’s suit. Many partnerships will treat

was down to thirty entries. Indeed Alan affair with the Nelsons leading on the 4♣ as a cue-bid here agreeing spades, but

Nelson, Chairman of the EBU Tournament first two sessions, but a 70% session from there seems little alternative to progress

Committee, announced that the event may Ollie and Sarah pipped them at the post. the hand further. With the lucky spade lie,

be moved to a different and, it is hoped, I understand that Ollie has won this com- grand slams in spades, diamonds and no-

more attractive venue. Personally, I think petition on three other occasions with trumps were available, though I think good

this will be sad, and will miss my traditional different lady partners. bidding should probably settle for the more