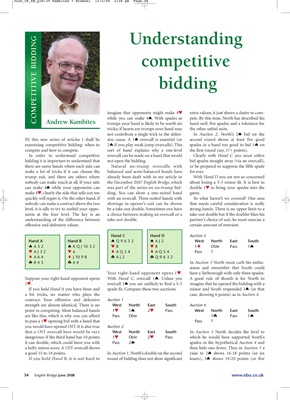 imagine that opponents might make 4♥ extra values; it just shows a desire to com-

while you can make 4♠. With spades as pete. By this time, North has described his

Andrew Kambites trumps your hand is likely to be worth six hand well: five spades and a tolerance for

tricks; if hearts are trumps your hand may the other unbid suits.

not contribute a single trick to the defen- In Auction 2, North’s 2♠ bid on the

IN this new series of articles I shall be sive cause. A 1♠ overcall is essential (or second round shows at least five good

examining competitive bidding: when to 2♠ if you play weak jump overcalls). This spades in a hand too good to bid 1♠ on

compete and how to compete. sort of hand explains why a one-level the first round (say, 17+ points).

bidding it is important to understand that not open the bidding. bid spades straight away (via an overcall),

make a lot of tricks if it can choose the balanced and semi-balanced hands have for ever.

trump suit, and there are others where already been dealt with in my article in With Hand D you are not so concerned

nobody can make much at all. If your side the December 2007 English Bridge, which about losing a 5-3 minor fit. It is best to

make 4♥, clearly the side that sells out too ding. You can show a one-suited hand game.

quickly will regret it. On the other hand, if with an overcall. Three-suited hands with So what haven’t we covered? One area

level, it is silly to try to outbid your oppo- by a take-out double. Sometimes you have strong hands. There is no upper limit to a

nents at the four level. The key is an a choice between making an overcall or a take-out double but if the doubler likes his

understanding of the difference between take-out double. partner’s choice of suit, he must exercise a

siasm and remember that South could

Your right-hand opponent opens 1 ♥ . have a Yarborough with only three spades.

Suppose your right-hand opponent opens With Hand C, overcall 1♠. Unless you A good rule of thumb is for North to

1♥. overcall 1♠ you are unlikely to find a 5-3 imagine that he opened the bidding with a

If you hold Hand A you have three and spade fit. Compare these two auctions: minor and South responded 1♠ (in that

a bit tricks, no matter who plays the case, showing 6 points) as in Auction 4.

contract. Your offensive and defensive Auction 1

strength are almost identical. There is no West North East South Auction 4

are like this, which is why you can afford Pass Dble 1♣ Pass 1♠

to pass a 1♥ opening bid with a hand that Pass ?

you would have opened 1NT. It is also true Auction 2

dangerous: if the third hand has 10 points 1♥ Dble 2♥ Pass which he would have supported South’s

it can double, which could leave you with Pass 2♠ spades in the hypothetical Auction 4 and

a hefty minus score. A 1NT overcall shows then bids one fewer. Thus in Auction 3 a

If you hold Hand B, it is not hard to round of bidding does not show significant losers), 3♠ shows 19-20 points (or five