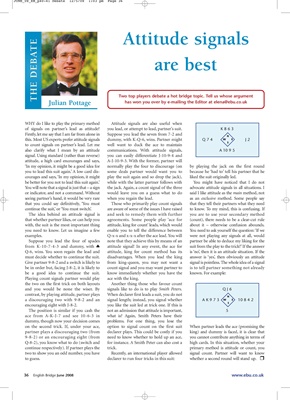 Julian Pottage has won you over by e-mailing the Editor at elena@ebu.co.uk

of signals on partner’s lead as attitude? you lead, or attempt to lead, partner’s suit. K863

Firstly, let me say that I am far from alone in Suppose you lead the seven from 7-2 and N

to count signals on partner’s lead. Let me well want to duck the ace to maintain

also clarify what I mean by an attitude communications. With attitude signals, A 10 9 5

signal. Using standard (rather than reverse) you can easily differentiate J-10-9-4 and

attitude, a high card encourages and says, A-J-10-9-3. With the former, partner will

‘In my opinion, it might be a good idea for normally play the four to discourage (on by playing the jack on the first round

you to lead this suit again.’ A low card dis- some deals partner would want you to because he ‘had to’ tell his partner that he

courages and says, ‘In my opinion, it might play the suit again and so drop the jack), liked the suit originally led.

be better for you not to lead this suit again.’ while with the latter partner follows with You might have noticed that I do not

You will note that a signal is just that – a sign the jack. Again, a count signal of the three advocate attitude signals in all situations. I

or indicator, and not a command. Without would leave you on a guess what to do said I like attitude as the main method, not

seeing partner’s hand, it would be very rare when you regain the lead. as an exclusive method. Some people say

that you could say definitively, ‘You must Those who primarily play count signals that they tell their partners what they need

continue the suit,’ or ‘You must switch’. are aware of some of the issues I have raised to know. To my mind, this is confusing. If

that whether partner likes, or can help you agreements. Some people play ‘ace for (count), there needs to be a clear-cut rule

with, the suit is the most important thing attitude, king for count’ leads, which would about it – otherwise confusion abounds.

you need to know. Let us imagine a few enable you to tell the difference between You need to ask yourself the question: ‘If we

examples. Q-x-x and x-x-x after the ace lead. You will were not playing any signals at all, would

Q-6, wins. You soon regain the lead and attitude, king for count method has its is ‘no’, then it is an attitude situation. If the

must decide whether to continue the suit. disadvantages. When you lead the king answer is ‘yes’, then obviously an attitude

Give partner 9-8-2 and a switch is likely to from king-queen, you may not want a signal is pointless. The whole idea of a signal

be in order but, facing J-8-2, it is likely to count signal and you may want partner to is to tell partner something not already

be a good idea to continue the suit. know immediately whether you have the known. For example:

Playing count signals partner would play ace with the king.

and you would be none the wiser. By signals like to do is to play Smith Peters. QJ6

contrast, by playing attitude, partner plays When declarer first leads a suit, you do not N

encouraging eight with J-8-2. you like the suit led at trick one. If this is

The position is similar if you cash the not an admission that attitude is important, 5

dummy, though now your decision comes problems. For one thing, you lose the

on the second trick. If, under your ace, option to signal count on the first suit When partner leads the ace (promising the

partner plays a discouraging two (from declarer plays. This could be costly if you king) and dummy is faced, it is clear that

9-8-2) or an encouraging eight (from need to know whether to hold up an ace, you cannot contribute anything in terms of

Q-8-2), you know what to do (switch and for instance. A Smith Peter can also cost a high cards. In this situation, whether your

continue respectively). If partner plays the trick. primary method is attitude or count, you

two to show you an odd number, you have Recently, an international player allowed signal count. Partner will want to know

to guess. declarer to run four tricks in this suit: whether a second round will stand up.