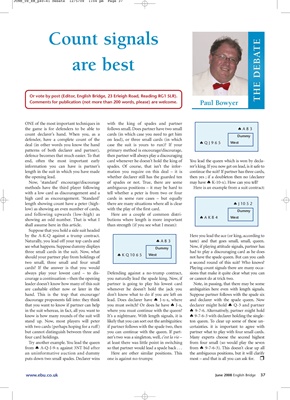 Comments for publication (not more than 200 words, please) are welcome. Paul Bowyer

the game is for defenders to be able to follows small. Does partner have two small ♠A83

count declarer’s hand. When you, as a cards (in which case you need to get him Dummy

defender, have a complete count of the on lead), or three small cards (in which

deal (in other words you know the hand case the suit is yours to run)? If your ♠QJ965 West

patterns of both declarer and partner), primary method is encourage/discourage,

defence becomes that much easier. To that then partner will always play a discouraging

end, often the most important early card whenever he doesn’t hold the king of You lead the queen which is won by decla-

information you can have is partner’s spades. Of course, that isn’t the infor- rer’s king. If you now get on lead, is it safe to

length in the suit in which you have made mation you require on this deal – it is continue the suit? If partner has three cards,

the opening lead. whether declarer still has the guarded ten then yes ; if a doubleton then no (declarer

Now, ‘standard’ encourage/discourage of spades or not. True, there are some may have ♠ K-10-x). How can you tell?

methods have the third player following ambiguous positions – it may be hard to Here is an example from a suit contract:

high card as encouragement. ‘Standard’ cards in some rare cases – but equally

low) as showing an even number of cards, with the play of the first card. Dummy

showing an odd number. That is what I butions where length is more important ♠AK84 West

shall assume here in this article. than strength (if you see what I mean):

Suppose that you hold a side suit headed

by the A-K-Q against a trump contract. Here you lead the ace (or king, according to

Naturally, you lead off your top cards and ♠A83 taste) and that goes small, small, queen.

three small cards in the suit. Now, what had to play a discouraging card as he does

not have the spade queen. But can you cash

two small, three small and four small a second round of this suit? Who knows?

cards? If the answer is that you would Playing count signals there are many occa-

always play your lowest card – to dis- Defending against a no-trump contract, sions that make it quite clear what you can

courage a continuation – then the opening you naturally lead the spade king. Now, if or cannot do at trick two.

leader doesn’t know how many of this suit partner is going to play his lowest card Note, in passing, that there may be some

are cashable either now or later in the whenever he doesn’t hold the jack you ambiguities here even with length signals.

hand. This is the trap that encourage/ don’t know what to do if you are left on Suppose partner follows with the spade six

discourage proponents fall into: they think lead. Does declarer have ♠ J-x-x, where and declarer with the spade queen. Now

that you want to know if partner can help you must switch? Or does he have ♠ J-x, declarer might hold ♠ Q-3 and partner

in the suit whereas, in fact, all you want to where you must continue with the queen? ♠ 9-7-6. Alternatively, partner might hold

know is how many rounds of the suit will It’s a nightmare. With length signals, it is ♠ 9-7-6-3 with declarer holding the single-

stand up. Now, most players will peter likely that you can sort out the ambiguities: ton queen. To clear up some of these un-

with two cards (perhaps hoping for a ruff) if partner follows with the spade two, then certainties. it is important to agree with

but cannot distinguish between three and you can continue with the queen. If part- partner what to play with four small cards.

Try another example. You lead the queen at least there was little point in switching from four small (so would play the seven

an uninformative auction and dummy Here are other similar positions. This the ambiguous positions, but it will clarify

puts down two small spades. Declarer wins one is against no-trumps: most – and that is all you can ask for.