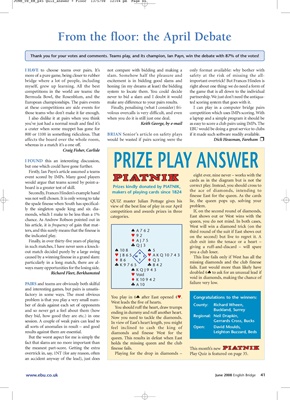 From the floor: the April Debate

Thank you for your votes and comments. Teams play, and its champion, Ian Payn, win the debate with 87% of the votes!

I HAVE to choose teams over pairs. It’s not compare with bidding and making a only format available: why bother with

more of a pure game, being closer to rubber slam. Somehow half the pleasure and safety at the risk of missing the all-

bridge where a lot of people, including excitement is in bidding good slams and important overtrick? But Frances Hinden is

myself, grew up learning. All the best honing (in my dreams at least) the bidding right about one thing: we do need a form of

competitions in the world are teams: the system to locate them. You could decide the game that is all down to the individual

Bermuda Bowl, the Rosenblum, and the never to bid a slam and I doubt it would partnership. We just don’t need the antiqua-

European championships. The pairs events make any difference to your pairs results. ted scoring system that goes with it.

at these competitions are side events for Finally, penalising (what I consider) fri- I can play in a computer bridge pairs

those teams who don’t make it far enough. volous overcalls is very difficult, and even competition which uses IMPs scoring. With

I also dislike it at pairs when you think when you do it is still just one deal. a laptop and a simple program it should be

you’ve just had a normal result and find it’s Keith George, by e-mail as easy to score a club pairs using IMPs. The

800 or 1100 in something ridiculous. That BRIAN Senior’s article on safety plays if it made such software readily available.

affects the board over the whole room, would be wasted if pairs scoring were the Dick Heasman, Fareham

whereas in a match it’s a one off.

I FOUND this an interesting discussion,

but one which could have gone further.

PRIZE PLAY ANSWER eight ever, nine never – works with the

Prizes kindly donated by PIATNIK, correct play. Instead, you should cross to

board is a greater test of skill.

makers of playing cards since 1824 the ace of diamonds, intending to

finesse East for the queen. As the cards

was not well chosen. It is only wrong to take

QUIZ master Julian Pottage gives his lie, the queen pops up, solving your

the spade finesse when South has specifical- problem.

view of the best line of play in our April

ly the singleton spade king and six dia- If, on the second round of diamonds,

competition and awards prizes in three

monds, which I make to be less than a 1% categories. East shows out or West wins with the

chance. As Andrew Robson pointed out in queen, you do not mind. In both cases,

his article, it is frequency of gain that mat- West will win a diamond trick (on the

ters, and this surely means that the finesse is ♠ A762 third round of the suit if East shows out

the indicated play. ♥ 92 on the second) but live to regret it. A

Finally, in over thirty-five years of playing ♦ AJ75 club exit into the tenace or a heart –

in such matches, I have never seen a knock- ♣ QJ3 giving a ruff-and-discard – will spare

particularly in a long match, there are al-

ways many opportunities for the losing side. fails. East would more than likely have

Richard Fleet, Berkhamsted doubled 6♠ to ask for an unusual lead if

PAIRS and teams are obviously both skilful ♣ A 10 failure very low.

and interesting games, but pairs is unsatis-

factory in some ways. The most obvious

You play in 6♠ after East opened 4♥. Congratulations to the winners:

problem is that you play a very small num-

West leads the five of hearts.

ber of deals against each set of opponents County: Richard Wheen,

You should ruff the heart, draw trumps

and so never get a feel about them (how Buckland, Surrey

ending in dummy and ruff another heart.

they bid, how good they are etc.) in one Now you need to tackle the diamonds. Regional: Neil Drapkin,

session. A couple of weak pairs can lead to In view of East’s heart length, you might Gerrards Cross, Bucks

all sorts of anomalies in result – and good feel inclined to cash the king of Open: David Moulds,

results against them are essential. diamonds and finesse West for the Leighton Buzzard, Beds

But the worst aspect for me is simply the queen. This results in defeat when East

the meanest part-score. Getting the extra finesse fails. This month’s new

overtrick in, say, 1NT (for any reason, often Playing for the drop in diamonds – Play Quiz is featured on page 35.

an accident anyway of the lead), just does