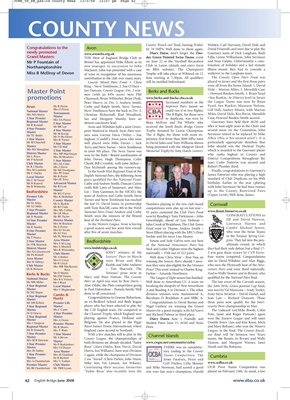 Congratulations to the Avon by 78 IMPS. Well done to them again. David Frisewell, and were due to play the

Mr P Fountain of Bristol has appointed Mike Elliott as its on June 22 at the Vauxhall Recreation and Sean Galpin. Unfortunately a com-

Northamptonshire illness meant they had to concede a

Maclaren. John was presented with a case on BBA website). The Champion’s

Miss B McElroy of Devon of wine in recognition of his enormous Trophy will take place at Wilstead on 12 walkover to the Langham team.

contribution to the club over many years. June starting at 7.30pm. All qualifiers The County Open Pairs Final was

the League Teams was won by Brian

Peter Sherry; in Div. 1, Andrew Smith, Increased numbers in the

Mrs G Perrin Steve Tomlinson have the lead; in Div. 3, could run it in two flights. Gill Hall, Audrey Moore, with Marion

Tournament The B flight, for those new Miles, David Hole, Roz Bavin, Meredith

2 Star Premier Mrs SA Pearce Ian and Margaret Mundy, have an to duplicate, was won by Case, Howard Basden-Smith second.

Mr M Krespi The A flight, for those with more ex- Seymour retired to be replaced by Mike

1 Star Master Mrs R Turner Ingham (Cardiff); Avon pairs who were perience (but fewer than 5000 MPs) went Allen (this is his second stint!). It is

won by the Bath / Bristol combination of

In the South West Regional Final of the

Mr B Porter English National Pairs, the following Avon James Fattorini who was playing a high

Mr B Wibberley Mr RJ Lott (with Rob Lawy of Somerset), and Marc with John Seymour) he had been runner

Master up in the County Restricted Pairs

Lee – Tony Gammon. In the NICKO, the

with Tony Ratcliff, came 4th in the Welsh competitions were also up on last year –

Master Mrs M Bracken In the Western League, Avon is having John Crook of Bradshaws. The Club Teams Lawrence Haynes and

8 Star Premier after five of seven matches. who won the Swiss Teams

Bedfordshire Simon and Judy Galvin won our heat gress. They led into the pen-

of the National Newcomers Pairs but

www.bedsbridge.co.uk Nick and Lesley Higham were the highest they had their only defeat, but a final 17-

Mrs G Lloyd were Brian and Rita winning the Seniors Pairs; should I men- also to David Wiltshire and Alan Biggs,

Keable, and John Andrews tion they were also eligible for the Veterans who won the Plymouth heat of the New-

Dr K Rickson Ross – Tim Sharrock. The Prize? This went instead to Charles King- comers Pairs and were third nationally.

Mr MB Miller Mr J Ward Pairs in April was won by Ron Davis – Well done to Amersham CC A team on The last event of the Cornish season,

Master Mrs V Hughesdon to Paul Habershon – Pamela Smith. Well A and Reading A in Division 1. The other was won by Val Manicom – Andy Tooley,

Cambs & division winners were Austenwood A, from Steve Stratton – David Daniel, and

3 Star Regional Master player who has been selected to play for Nigel Guthrie on winning the Grand county Pairs championship in May.

Master Ms C Curtis the U20 English team. He competed in Masters by a good margin, with Ed Scerri The Liskeard Lot(Mike Booth, Colin

Master Mrs A Green Diary Dates: June 1, Friendly and won the Eastern League and will meet

County League, the championships of teams, the Keasts, Jo Bryant and Wally